Watch on: YouTube  Dailymotion  优酷
#1437 This Video Will Make You Realize You've Been Learning English The Wrong Way Your Whole Life
Hi, I'm Sarah, welcome to The Daily English Show.
Today's mistake comes from a sign I saw at a music festival.
The sign says: Northern Bass recommends you wear suitable footwear at all times to ensure you don't get Splinters.
Can you see anything wrong with that sign?
Splinters shouldn't have a capital s.
A splinter is a small, thin, piece of wood, glass, or other similar material broken off from a larger piece.
On that sign there's no reason why splinters should be capitalized.
How about Northern Bass, is that OK with capital letters? Yes, because that's the name of the event.
In English, we use capital letters for names of places, books, brands, people's names ... but not for regular nouns - unless they're at the start of a sentence.
So let's say I said this: I watched The Godfather with David and then we drove to Walmart in my Maserati.
The Godfather is the name of a movie, so that should be capitalized, David is a person's name and Maserati and Walmart are both brand names, so they should all be capitalized.
But if I said: I watched a movie with a friend and then we drove to the supermarket in my car.
Then the only thing capitalized in that sentence would be the I because it's at the start of the sentence, and also because the personal pronoun I is always capitalized.

The site I'd like to talk about today is called the Clickbait headline generator.
This is a humorous site that makes random clickbait headlines.
So, what are clickbait headlines?
Well, before the internet, when we read news on paper, writers always tried to capture the attention of the reader with catchy headlines. And the purpose was to get the reader to read that article, or if the article was on the front page, maybe to buy the paper.
But with clickbait headlines, they don't care so much if you read the article, the point is they want you to click on the article so that they can get traffic to sell advertising and make money.
And clickbait headlines have a certain structure that they usually follow ... which is how they could make this generator.
I made up some headlines to show you a few patterns that are used in clickbait.
Firstly, clickbait headlines often use numbers.
7 Surprising Facts About Learning English
9 Reasons Why The Daily English Show Is The Greatest Show Ever
Clickbait headlines often use words like unbelievable, inspiring or shocking.
The Unbelievable Story Of A Man Who Became A Fluent English Speaker In Just 3 Days
This Woman Was Asked To Leave Her English Class, The Reason Why Will Shock You!
Often clickbait headlines will be a question.
Can You Be A Fluent English Speaker By Studying For Just 10 Seconds A Day?
How often do you get sucked in by clickbait? Did you feel like clicking on those headlines that I made up?
How about this video? If you only clicked on it because of the title, how annoyed are you right now that you got sucked in?

Kia ora in Stick News today a man in the United States was angry with his local television station when he thought they changed their logo to support gay pride.
Last week same-sex marriage was legalized in the United States.
Lots of people and brands celebrated by making their profile pictures rainbow-coloured.
The rainbow flag was designed by an artist in San Francisco in 1978 and is a symbol of gay pride.
One man thought his local TV station had also changed its logo to a rainbow theme to celebrate gay pride, so he complained to the station.
The TV station actually hadn't changed their logo. They're an affiliate of NBC and they use the NBC peacock in their logo.
And that was Stick News for Wednesday the 1st of July.
Kia ora. 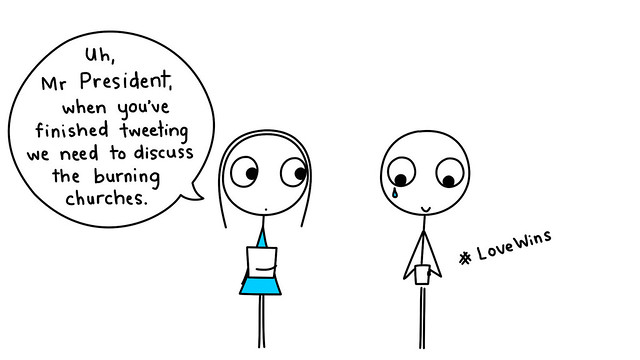 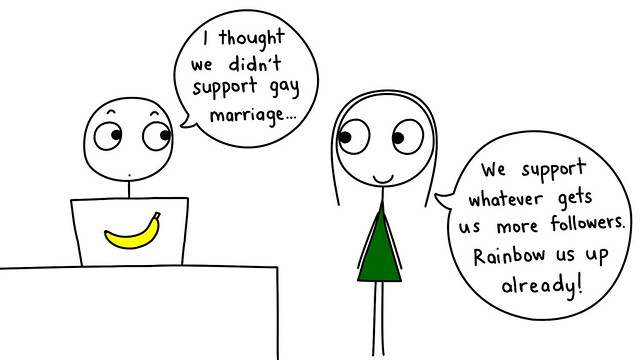 I thought we didn't support gay marriage ...
We support whatever gets us more followers. Rainbow us up already! 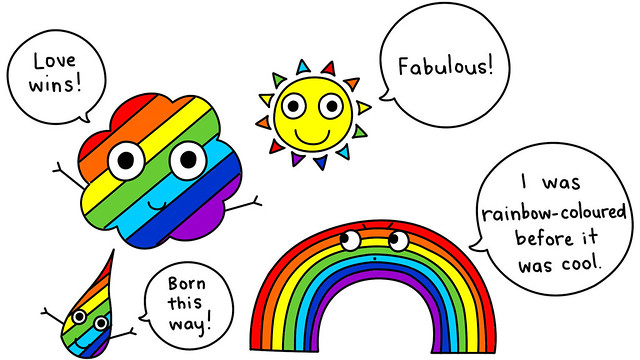 Love wins!
Fabulous!
Born this way!
I was rainbow-coloured before it was cool. 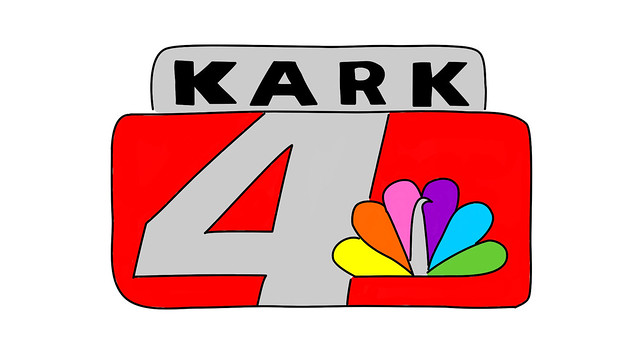 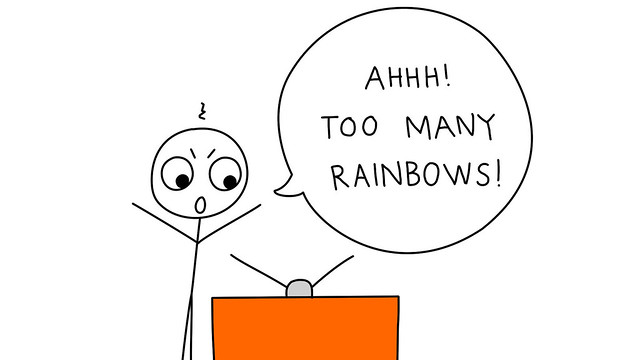 AHHH! TOO MANY RAINBOWS! 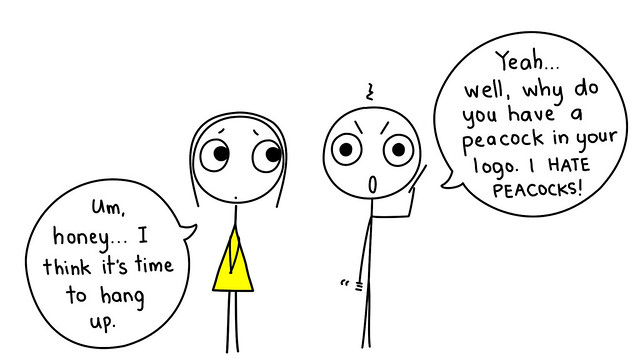 Yeah ... well, why do you have a peacock in your logo. I HATE PEACOCKS!
Um, honey ... I think it's time to hang up.
Drawings on Flickr

Today's word is ensure.
The sign I showed you at the start of the show says: Northern Bass recommends you wear suitable footwear at all times to ensure you don't get Splinters.
Ensure is a more formal way of saying make sure. So you're more likely to come across it in written English rather than spoken English.
If you were renting or hiring some kind of room for your community group, the written instructions might say: Please ensure all lights are off before you leave.
But if you were reminding someone verbally about those instructions, you might say: Make sure you turn all the lights off before you leave.

Sarah: I don't remember ever getting splinters in my feet. I've got them in my fingers before but not my feet.
Donna: I got one in my foot once.
Sarah: How?
Donna: Just walking around outside. It was a tiny piece of wood.
Sarah: How did you get it out?
Donna: Baking soda.
Sarah: Really? Baking soda?
Donna: Yeah, I soaked it in some warm water and baking soda and it came out quite easily.
Sarah: Oh, interesting. I've only ever used needles to get them out, but that sounds much better.