Watch on: YouTube  Dailymotion  优酷
#1425 Avalanche City - You And I, FIFA U20 World Cup, The Last Thing Grandpa Said To Me
Hi, I'm Sarah, welcome to The Daily English Show.
Today we're studying a song called You and I by Avalanche City.
I saw Avalanche City play in 2011. It was at an event for the final of the Rugby World Cup on Queens Wharf here in Auckland and I thought they were great. When I say "they", Avalanche City is actually just one person - Dave Baxter - but he has a band with him when he plays live.
You and I is a great song for studying the conditional tense. It's a love song, very sweet and romantic, he's telling a girl all the things he would do for her.
And the structure's usually: If + past tense ... I would ...
For example:
If you found your toothpaste empty
I would squeeze out just a little more
And if you had the sweetest victory
I'd high five you 'til our hands were sore
Til is short for until. It can be spelt like this, or this, or this.
It's very common to say 'til instead of until.
For example: I had to work 'til nine last night.
But you don't tend to shorten until if you're using it at the start of a sentence.
For example: Until last year I'd never lived alone.

Kia ora in Stick News today the FIFA Under 20 World Cup is being held in New Zealand for the first time.
FIFA is an international body responsible for organizing football's major international tournaments including the World Cup.
In March 2011, FIFA announced the Under 20 World Cup would be held in New Zealand.
The games are being played in seven cities in New Zealand from the 30th of May to the 20th of June.
The final will be held at North Harbour Stadium in Auckland.
And that was Stick News for Friday the 29th of May.
Kia ora. 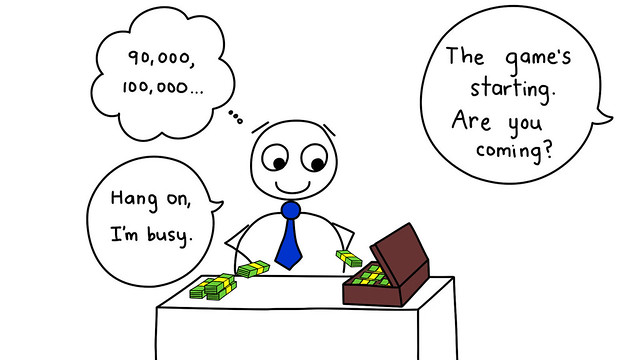 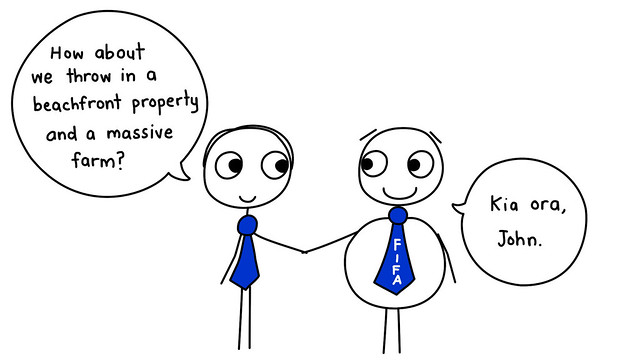 How about we throw in a beachfront property and a massive farm?
Kia ora, John. 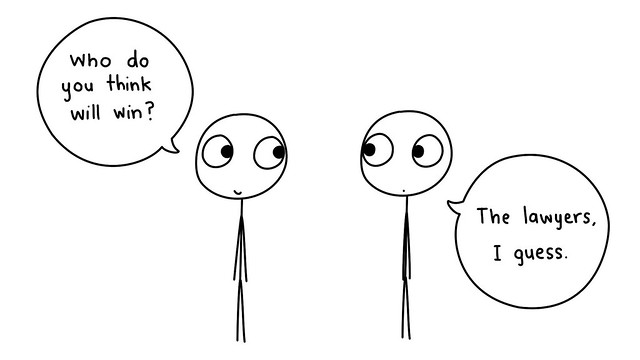 Who do you think will win?
The lawyers, I guess. 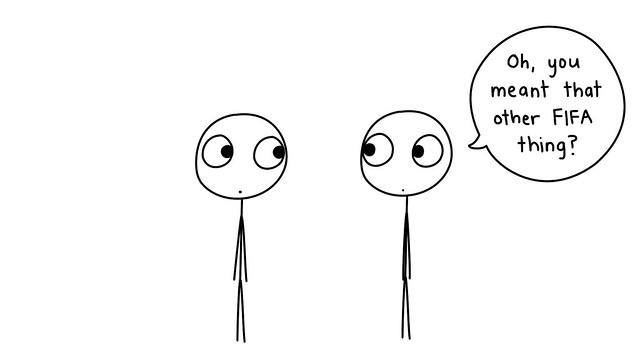 Oh, you meant that other FIFA thing?
Drawings on Flickr

Today's word is fine.
Fine can mean many different things.
If the weather is bright and clear, you can say: "It's a fine day."
If someone asks you if you're still feeling sick and you've recovered, you could say: "I feel fine now."
If someone refuses to do something and you're annoyed, you could say: "Fine. I'll do it myself then."
Fine can also mean of very high quality. For example, fine dining restaurants have better quality food than regular restaurants or fast food restaurants.
This is from today's song:
If we climbed the highest treetop
And you said you couldn't climb back down
Well I would build the finest tree house
For our new life above the ground
So romantic.
When he says "the finest tree house", he's talking about quality, so he means he'll build a very high quality tree house. 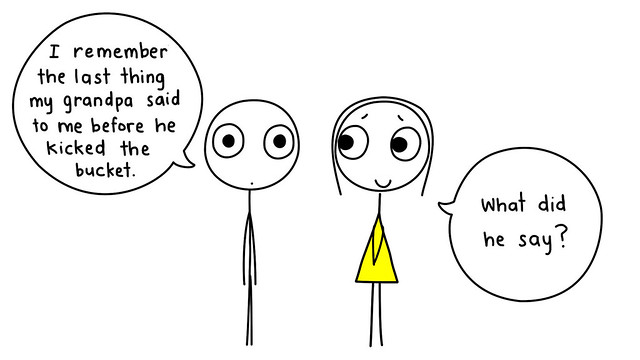 I remember the last thing my grandpa said to me before he kicked the bucket.
What did he say? 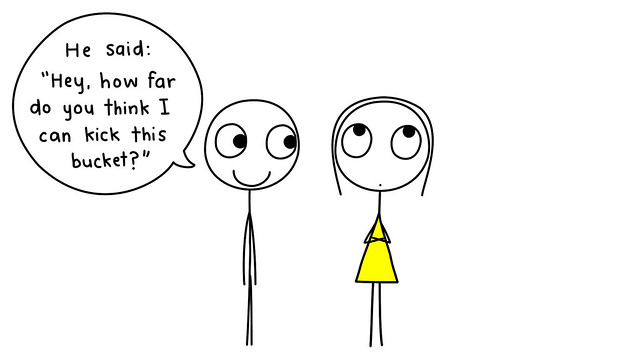 He said: "Hey, how far do you think I can kick this bucket?"

Lavon: Was that the first time you'd heard of Avalanche City?
Sarah: At the World Cup event?
Lavon: Yeah.
Sarah: No, I'm pretty sure I'd heard of them before that. Yeah I remember hearing an interview with Dave Baxter talking about how he'd recorded his album in a hall.
Lavon: Which hall was it?
Sarah: It was in Warkworth I think.
Lavon: Where's that?
Sarah: It's a small town about an hour north of Auckland.
Lavon: Why did he record in a hall?
Sarah: It might have been something to do with the sound. I can't quite remember.

ESL Video Quiz: #1425 Avalanche City
ENDING
And that was The Daily English Show.
We have a channel on YouTube where we upload the Friday Joke videos. So if you want to watch the jokes again or if you want to share the videos, please go and check out our Friday Joke channel on YouTube.
And if you go to thedailyenglishshow.com/friday-joke you'll find all the jokes there too.
See you tomorrow. Bye!
ENDING FOOTAGE
Filmed on Sunday 23rd October 2011 at Queen's Wharf, Auckland, New Zealand, before the final of the Rugby World Cup.
LINKS