Watch on: YouTube  Dailymotion  优酷
#1417 C.G.P. Grey - What Is Reddit?, On The Off Chance, NZ PM Ponytail Pulling, Enraging
Hi, I'm Sarah, welcome to The Daily English Show.
Today we're studying a video called: What is reddit?
Do you know what Reddit is? And, if so, do you know how to explain it?
This video's made by a guy called C.G.P. Grey and I think he does a pretty good job of explaining what Reddit is.
This is how he explains the name Reddit: "The name is a contraction of 'read it' as in: I already read it on reddit, which if you spend significant time on the site, is what you'll say to everyone who tries to show you anything."
What he means is that a lot of other sites find content from Reddit, so if you spend a lot of time on Reddit, and your friend who loves Facebook says, "Hey, look at this cute thing I found on my Facebook feed", you'll probably be like: "Oh, yeah, I saw that on Reddit a few days ago."
C.G.P. Grey explains that sections of Reddit are called subreddits. And anyone can make a new subreddit.
He says: " ... on the off chance you're interested in something that doesn't yet exist, just press a button and a new subreddit is born."
On the off chance is a useful idiom to remember. It means that there's a small chance, or just in case.
For example, a few years ago I went shopping for some clothes at Dress-Smart which is an outlet shopping mall here in Auckland and I ended up going on a bit of a shopping spree and I had quite a few shopping bags ... and when I got home I realized that one of them was missing.
And I think I must have left it in a shop somewhere maybe in the changing rooms while I was trying something on. And I knew that it was probably gone forever because whoever found it would have just kept it - because there are quite a few dishonest people in New Zealand unfortunately - but just on the off chance that an honest person had found it and handed it in, I called the office of the shopping mall and I probably said something like that: "I realise it's unlikely, but I'm just calling on the off chance that someone handed it in."
But no one did, so, it was gone forever. 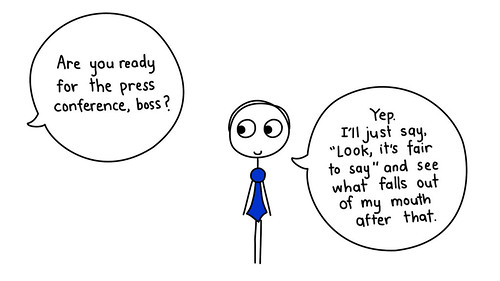 Are you ready for the press conference, boss?
Yep. I'll just say, "Look, it's fair to say" and see what falls out of my mouth after that. 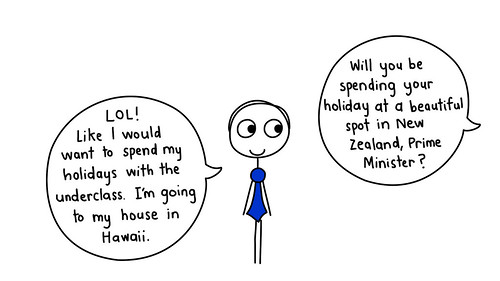 Will you be spending your holiday at a beautiful spot in New Zealand, Prime Minister?
LOL! Like I would want to spend my holidays with the underclass. I'm going to my house in Hawaii. 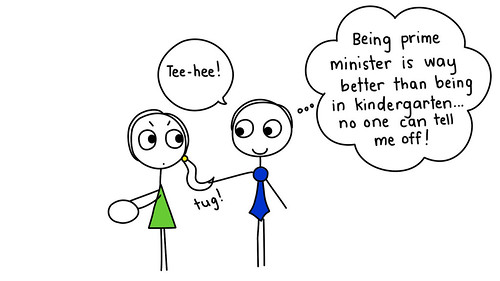 Being prime minister is way better than being in kindergarten ... no one can tell me off!
Tee-hee!
tug! 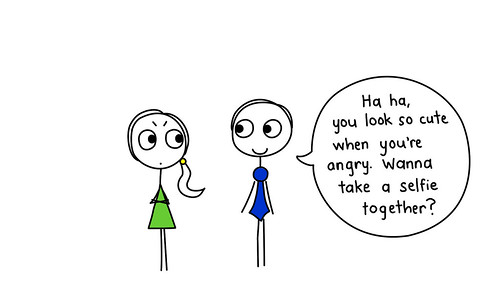 Ha ha, you look so cute when you're angry. Wanna take a selfie together? 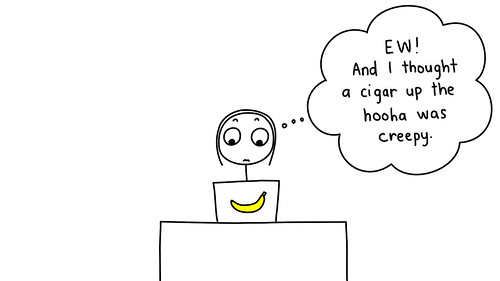 EW! And I thought a cigar up the hooha was creepy. 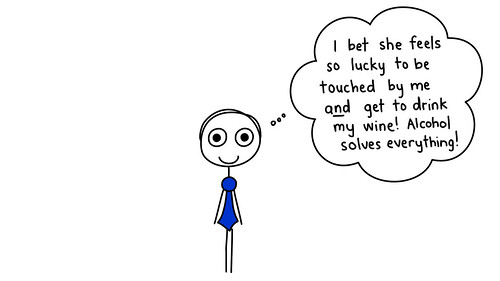 I bet she feels so lucky to be touched by me and get to drink my wine! Alcohol solves everything!
Drawings on Flickr

Today's word is enraging.
You might notice that this word has rage inside of it. Rage is a feeling of violent anger that's difficult to control.
En is a prefix which means to cause to be.
So enrage is a verb which means to make someone very angry.
It's usually passive, so you're more likely to say: I was enraged by the article, than: The article enraged me.
In today's video, C.G.P. Grey says: "Because there are no editors on Reddit, you never know what you're going to find but you can bet it's going to be funny or interesting or enraging because thousands of other people have already voted that it's something to see."
So he says that some things that you see on Reddit are enraging which means that they'll make you very angry.
Have you ever seen something on the internet that enraged you?

Mike: Do you like Reddit?
Sarah: Yeah, it's possible that I have a slight Reddit addiction.
Mike: How much karma do you have?
Sarah: Oh, hardly any. I mainly just read stuff.
Mike: Which subreddits do you like?
Sarah: I like AskReddit. I like reading people's stories. Um, what else? Photoshop Battles. Um, RedditGetsDrawn.
Mike: What's that?
Sarah: RedditGetsDrawn?
Mike: Yeah.
Sarah: It's a subreddit where people post photos of themselves and other people draw them.
Mike: So you've posted pictures of yourself?
Sarah: No, no, I've never done that. I just like drawing people. I've drawn quite a few people.
Mike: What's your username?
Sarah: I can't tell you. Yeah, I want to keep it anonymous. That's one thing I really like about Reddit ... is the anonymity.

ESL Video Quiz: #1417 Comprehension
ENDING
And that was The Daily English Show.
Please go to thedailyenglishshow.com/1417 to check the script and links for today's show.
And please go to reddit.com to check that out if you haven't already. And tell me what you think.
See you tomorrow. Bye!
NOTES
on the off chance example
Apologize or apologise?
Realize or realise?
ENDING FOOTAGE
Filmed on Sunday 19 April 2015 in the Auckland Domain, Auckland, New Zealand from the steps of the Auckland War Memorial Museum.
LINKS