Watch on: YouTube  Dailymotion  优酷
#1416 No Ragrets, Very British Problems, You're A Donkey, Livid, Anzac Giant Poppy
Hi, I'm Sarah, welcome to The Daily English Show.
On Wednesdays we study a mistake and today we're looking at a mistake in a tattoo.
This tattoo says: no ragrets. Can you spot the mistake?
That's right. The a should be an e. Regrets is spelt r-e-g-r-e-t-s.
This actually comes from a movie that came out in 2013 called We're the Millers. I've never seen it but I've seen a lot of people on the internet write no ragrets with an a - obviously spelling it wrong on purpose ... and I finally looked it up and it turns out it comes from this movie.
I saw a clip of the scene where they're talking about the tattoo. It's pretty funny, you should go and check it out.

Recently I came across a Twitter account with some amusing tweets that I thought I'd share with you. The account is called Very British Problems and the Twitter handle is @SoVeryBritish
The Tweets describe situations that you might experience in life. And I don't think you have to be British to relate to them. They're more human problems than British problems - with a particular focus on being a bit socially awkward and shy and polite.
Some of them are translations, explaining what people really mean sometimes when they're being polite.
Here's one of the tweets: "Anyway, I'll let you get on..." - Translation: Please go away
I'll let you get on is a polite way of ending a conversation. Another way you could say that is: I'd better let you go.
For example if you're on the phone talking to someone and you want to wrap up the conversation because you have something that you need to do, or just because you've had enough of the conversation, then, to be polite, you might say: "Well, I'd better let you go ..." When what you really mean is: "I want to finish this conversation."
Here's another tweet: "How's the rest of your afternoon looking?" - Translation: I'm about to give you loads of work
This is something that you're quite likely to hear at an office. And if you hear that question: "How's the rest of your afternoon looking?" or "How's your morning looking?" then I'd say there's a 99% chance that they're about to give you more work.
Here's a couple more of their tweets:
"Honestly, don't worry about it" - Translation: What the hell have you done?
And:
"Let's come back to that" - Translation: Let's forget about that immediately and forever
Can you relate to these tweets? How about if you translate them to another language?

Kia ora in Stick News today Lindsay Lohan accidentally told millions of people on Twitter "you're a donkey" in Arabic.
Lindsay Lohan is an American actor who starred in the 2004 film Mean Girls.
She now has almost 9 million followers on Twitter.
On Monday Lindsay tweeted a picture from her Instagram feed which said "You're beautiful" in English and "You're a donkey" in Arabic.
And that was Stick News for Wednesday the 22nd of April.
Kia ora. 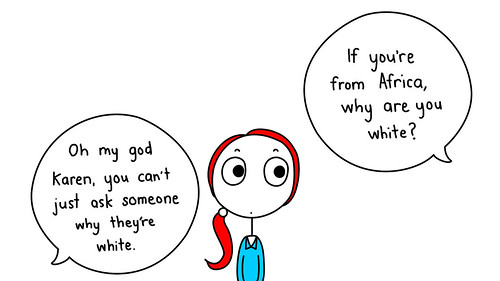 If you're from Africa, why are you white?
Oh my god Karen, you can't just ask someone why they're white. 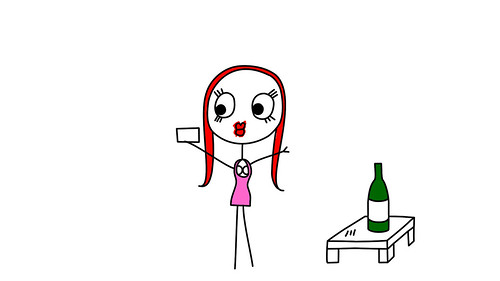 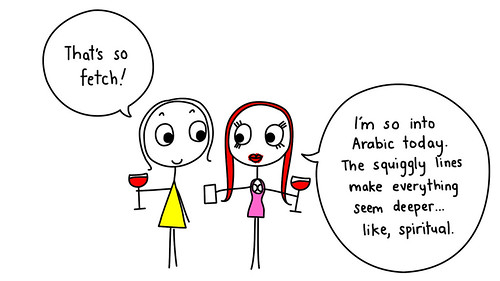 That's so fetch!
I'm so into Arabic today. The squiggly lines make everything seem deeper ... like, spiritual.
Drawings on Flickr

Today's word is livid.
Livid means extremely angry.
Here's a tweet from @SoVeryBritish
Removing the "kind" from "kind regards" to let the recipient know you're absolutely bloody livid
Kind regards is one way you can end an email. There are many different ways to sign off at the end of an email - including many variations of regards, such as: best regards, kind regards, warm regards, warmest regards and just regards.
I can definitely relate to this tweet and I may have done something similar myself - going to write something friendly like warm regards and then stopping and thinking, "Actually no warm regards for you asshole, you just get regards." Send.
How about you? Can you relate this tweet?

Aria: How was your weekend?
Sarah: Pretty good. I went to see The Giant Poppy on Sunday.
Aria: Giant poppy?
Sarah: Yeah. It's an art installation. They're making a giant poppy out of thousands of metal discs. You can write a message on a disc and add it to The Giant Poppy.
Aria: Oh, is that for Anzac Day?
Sarah: Yeah. Anzac Day's on Saturday so the poppy thing's going on all week I think.
Aria: Where is it?
Sarah: In the domain, by the museum.