Watch on: YouTube  Dailymotion  优酷
#1415 Anchorman - I Did Over 1000, Company, Feeble, Gone With The Wind Dress
Hi, I'm Sarah, welcome to The Daily English Show.
Today we're studying a scene from Anchorman. The full title of the movie is Anchorman: The Legend of Ron Burgundy.
This is a comedy which came out in 2004, but I didn't watch it until about a year ago. And when I finally watched it I spent the entire movie going: "Oh, so that's where that line comes from." Because Anchorman is full of lines that people love to quote on the internet.
For example:
I love lamp.
I immediately regret this decision.
That escalated quickly.
60 percent of the time, it works every time.
I'm kind of a big deal.
Go fuck yourself, San Diego.
In the scene we're studying today, Ron Burgundy is attempting to impress his coworker by lifting weights in his office.
It's a pretty funny scene for several reasons. Firstly, lifting weights in your office with your shirt off is a ridiculous way to try and impress someone.
Secondly, because he denies setting up the meeting. He says: "Oh, Miss Corningstone. I wasn't expecting company. Just doing my workout. Tuesday's arms and back."
Company means a visitor or visitors. So he means he wasn't expecting any visitors to come to his office. Which is clearly not true, because he asked her to come.
A bit later he says: "I don't know if you heard me counting. I did over a thousand."
He means he did over a thousand reps. He was doing bicep curls. So that's pretty funny because if you know anything about working out, you'll know that you don't usually do a thousand reps of anything. And also because he's clearly not in very good shape so he obviously doesn't work out much, if at all.
One more silly thing he says is: "Just watch out for the guns. They'll get you."
Guns is a slang word for arms. Well, it can mean arms, but I think it's usually used to refer to biceps or upper arms.

Kia ora in Stick News today a dress from Gone With The Wind was sold at auction for 137 thousand dollars.
The film Gone with the Wind was released in 1939.
Wikipedia says it's regarded as "one of the greatest films of all time".
In the early 60s a man called James was doing some research at a costume company when he came across a dress that was worn in the film.
The company was about to throw the dress away, so James asked if he could buy it. And they sold it to him for $20.
Last week the dress was sold in an auction in California for $137,000.
And that was Stick News for Tuesday the 21st of April.
Kia ora. 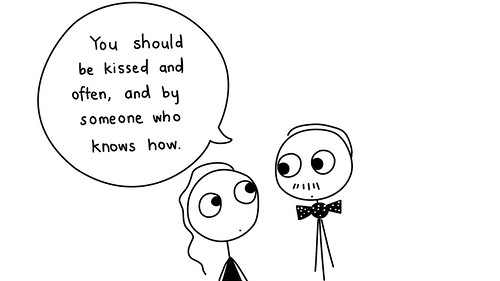 You should be kissed and often, and by someone who knows how. 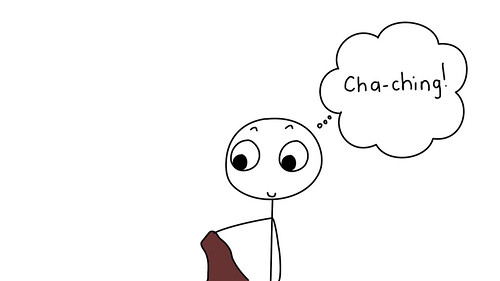 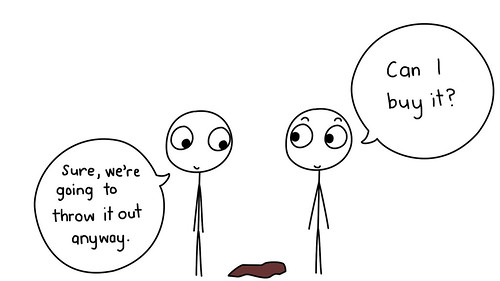 Can I buy it?
Sure, we're going to throw it out anyway.
That's a lot of money for a dress.
Frankly my dear, I don't give a damn.
Drawings on Flickr

Today's word is feeble.
Feeble means weak or failing to convince or impress.
Feeble is often used with the word excuse. A feeble excuse.
Have you ever heard or given a feeble excuse?
I searched for an example and I found this headline: Why Arsenal's feeble excuses are an insult to Liverpool and the FA Cup.
It's an article about how a football club didn't make available as many tickets as they could have and the club said it was a safety issue. And the writer of this article called this "a feeble excuse".
In today's conversation Veronica Corningstone is not impressed with Ron Burgundy's attempts to impress her. She calls it a feeble attempt.
She says: "This has to be the feeblest pick-up attempt that I have ever encountered."

Ron:One thousand one, one thousand two ...
Veronica: Uh, Mr. Burgundy?
Ron: one thousand three...
Veronica: Helen said that you needed to see me.
Ron: Oh, Miss Corningstone. I wasn't expecting company. Just doing my workout. Tuesday's arms and back.
Veronica: Well, you asked me to come by, sir.
Ron: Oh, did I?
Veronica: Yes.
Ron: Ohh, it's the deep burn! Oh, it's so deep! Oh, I can barely lift my right arm 'cause I did so many. I don't know if you heard me counting. I did over a thousand. You have your ubulus muscle which connects to the upper dorsimus. lt's boring, but it's part of my life. l'm just gonna grab this shirt, if you don't mind. Just watch out for the guns. They'll get you.
Veronica: You are pathetic. This has to be the feeblest pick-up attempt I have ever encountered. You know, I expected this from the rest of them, Mr. Burgundy, but not from you.