Watch on: YouTube  Dailymotion  优酷
#1409 Patch, Tapastic, Sarah's Scribbles, Procrastinate, Model Accidentally Gives Away Car
Hi, I'm Sarah, welcome to The Daily English Show.
This is a sign I saw at the supermarket. Can you spot the mistake? Yes, thank you should be two words.
Should thank you always be two words? Well, in this case, yes, because you're using thank you as an exclamation, to express your gratitude.
But according to some people - like oxforddictionaries.com - thank you can be a hyphenated word if it's being used as a modifier.
For example: I wrote her a thank-you note.
But in this sign, it should be two words.
By the way, do you know what what kind of patch they're talking about?
Patch has several meanings, but in this case it means gang patch, which is usually a symbol on your clothing which shows which gang you're a member of.
I don't want to show you an actual gang patch - you can look it up on Google images if you want - but if The Daily English Show was a gang, our patch might look like this.
Wikipedia says the term gang patch is used specifically in New Zealand. I don't know if that's true and, if it is, I don't know what they're called in other countries.
And if you're wondering why a supermarket would have a sign like this, Wikipedia also says: "New Zealand has more gangs per head than any other country in the world".
So, yay us.

Today I'd like to tell you about a site called Tapastic.
Tapastic is a place where you can find lots of awesome web comics.
For example, my favourite comic that I've come across so far is Sarah's Scribbles. Not me, another Sarah.
This is one of her comics. The title is Procrastination. Procrastination is when you delay doing something that you should do, usually because you don't want to do it. 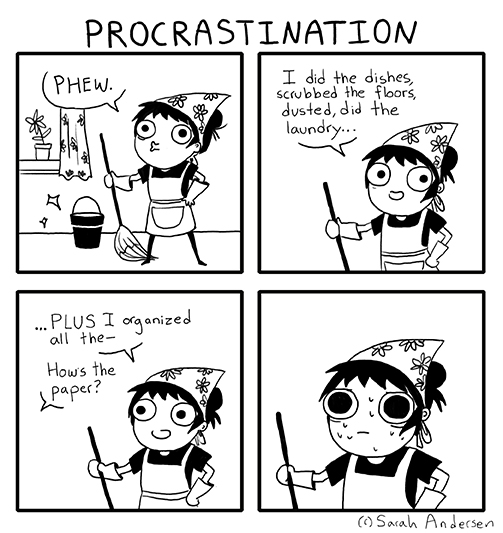 And people procrastinate in many different ways. For example, you might open up your favourite website like Reddit, read a couple of comments, read a couple more.
And the situation in this comic is one of the ways that I procrastinate. Let's read it.
Phew.
I did the dishes, scrubbed the floors, dusted, did the laundry ...
PLUS I organized all the -
How's the paper?
A paper is a piece of written work done by a student. It's American English - in New Zealand we call the stuff we have to do for school or university essays or assignments, not papers.
The girl in the comic is avoiding working on paper, so she procrastinates by cleaning.
What's your favourite way to procrastinate?

Kia ora in Stick News today a model on a TV show gave away a car by mistake.
The Price Is Right is a TV game show which began in 1956.
On the show contestants win prizes by correctly guessing the price of things.
Recently on the US version of the show a contestant was guessing the price of a car, when the model accidentally revealed the correct price forcing the host to give the car to the contestant.
After she realized her mistake, the model hid behind the price tags.
She later revealed on Twitter that she hadn't been fired.
And that was Stick News for Wednesday the 15th of April.
Kia ora. 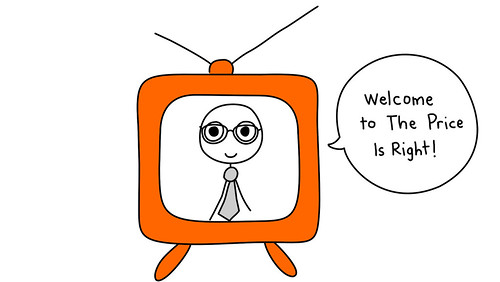 Welcome to The Price Is Right 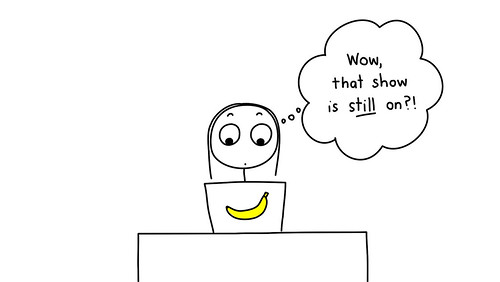 Wow, that show is still on?! 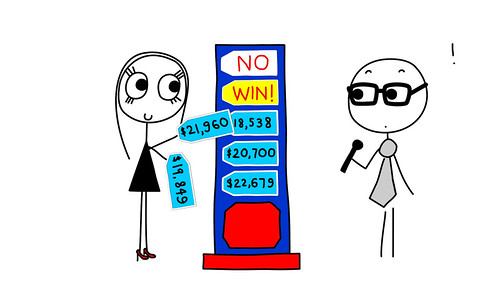 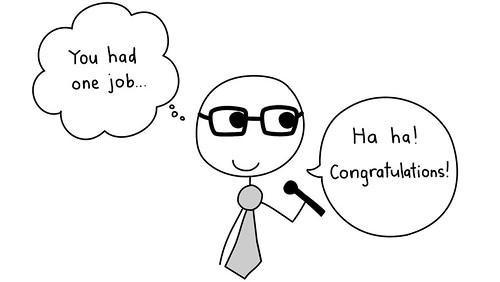 You had one job ...
Ha ha! Congratulations! 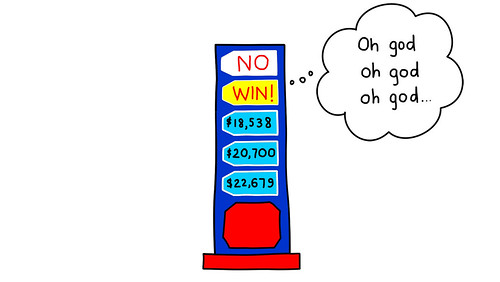 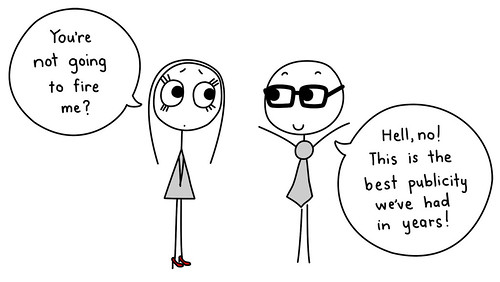 You're not going to fire me?
Hell, no! This is the best publicity we've had in years!
Drawings on Flickr

Today's word is figure out.
This comes from another one of Sarah's comics. The character says: "I just figured out why my room is always so messy."
To figure out is a phrasal verb which means: to think about something until you understand it.
For example, if your friend lends you something like ... a drill... and says: "Do you know how to use it?"
You can say: "Nah, but I'm sure I'll figure it out."

Alice: What's your favourite way to procrastinate?
Sarah: Probably Reddit. Or cleaning, I quite often do that when I'm procrastinating.
How about you? How do you usually procrastinate?
Alice: Naps or Netflix.
Sarah: What have you been watching on Netflix?
Alice: I just finished House of Cards season 3.
Sarah: Ahh, don't tell me anything, I haven't seen it yet.
Alice: Have you seen any of it?
Sarah: Yeah, all of seasons 1 and 2. But I haven't started season 3 yet.
Alice: OK, I won't say anything.