Watch on: YouTube  Dailymotion  优酷
#1408 Airplane! Don’t Call Me Shirley, Not Important Right Now, Obama + Castro Shake Hands
Hi, I'm Sarah, welcome to The Daily English Show.
Today we're studying a scene from a movie called Airplane! Airplane! came out in 1980 and is an American satirical disaster comedy film.
It's a very funny movie and I recommend watching it if you haven't already. A lot of the humour is from playing with words - such as when words or sentences have double meanings.
For example, when a flight attendant says to a passenger: "Excuse me sir, there's been a little problem in the cockpit..."
And the passenger says: "The cockpit...what is it?"
When he says "what is it" - the it he is referring to is obviously the problem. He means: "What is the problem in the cockpit?"
However, the sentence, "The cockpit ... what is it?", could also mean: "What is the cockpit?" A sentence (I meant to say question) you might ask if you don't know what a cockpit is. But in this context, there's no way anyone would think that that's what he meant.
But the flight attendant does take it that way, and that's where the humour is.
After he says, "The cockpit ... what is it?", she says: "It's the little room in the front of the plane where the pilots sit, but that's not important right now."
This is called syntactic ambiguity by the way. That means that a sentence can be interpreted in more than one way because the sentence structure is ambiguous.
The scene right after this one has one of the most famous lines in this movie. A man called Dr Rumack asks a man called Striker: "Can you fly this plane and land it?"
And Striker replies: "Surely you can't be serious?"
And Dr Rumack says: "I am serious. And don't call me Shirley."
Of course Striker wasn't calling him Shirley, but surely sounds a bit like Shirley.
It's funny because there's no way anyone would make that kind of misunderstanding, so it's a ridiculous thing to say. But the way the actor delivers the line is completely serious. This kind of delivery is called deadpan.
This is a great line to remember so you can throw it into conversation some time when someone uses the word surely.
For example, you're in the kitchen with your flatmate and they're looking at an empty jar of coffee beans and they say: "Surely we can't be out of coffee already."
You can say: "We are out of coffee. And don't call me Shirley."

Kia ora in Stick News today Barack Obama shook hands with Raul Castro.
Barack Obama is the president of the United States of America.
Raúl Castro is the president of Cuba.
The US and Cuba haven't been friends for more than 50 years.
In December, Obama and Castro announced the beginning of a process of normalizing relations between Cuba and the United States.
Media sources have named this process the Cuban Thaw.
Last week Obama and Castro met at a summit in Panama and shook hands.
Obama is now considering removing Cuba from the US list of state sponsors of terrorism.
And that was Stick News for Tuesday the 14th of April 2015.
Kia ora. 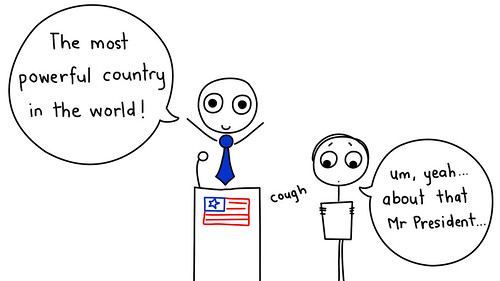 The most powerful country in the world!
cough
Um, yeah ... about that Mr President. 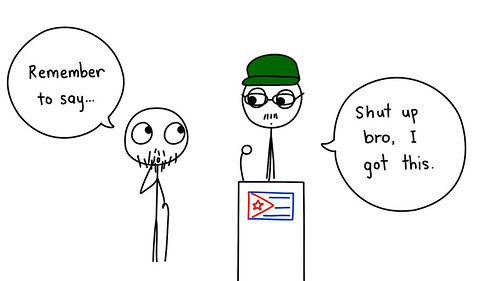 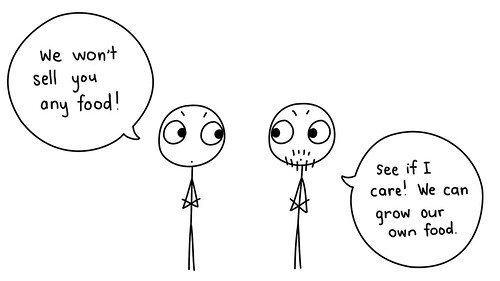 We won't sell you any food!
See if I care! We can grow our own food. 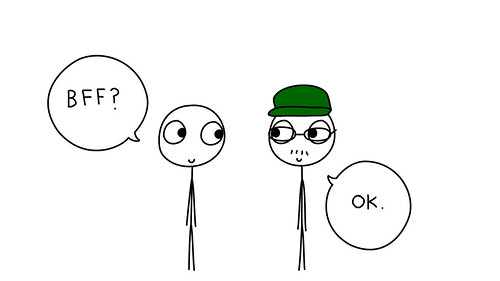 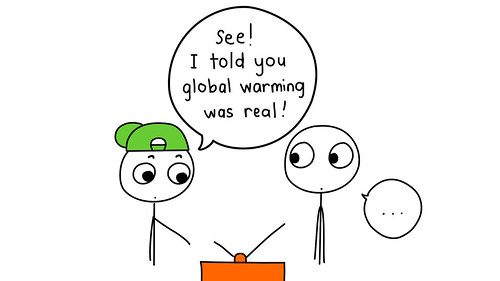 See! I told you global warming was real!
... 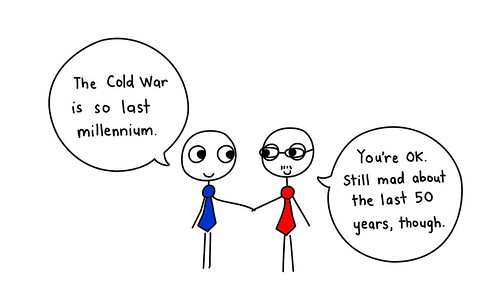 The Cold War is so last millennium.
You're OK. Still mad about the last 50 years, though. 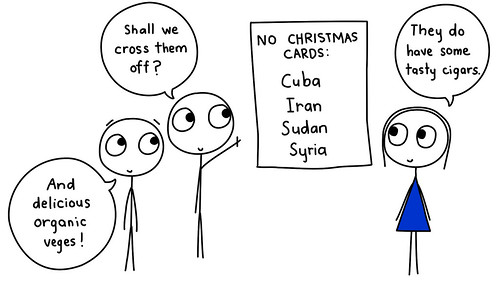 NO CHRISTMAS CARDS: Cuba Iran Sudan Syria
Shall we cross them off?
They do have some tasty cigars.
And delicious organic veges!
Drawings on Flickr

Randy: Excuse me sir, there's been a little problem in the cockpit...
Striker: The cockpit...what is it?
Randy: It's the little room in the front of the plane where the pilots sit, but that's not important right now. You see, the first officer is ill and the captain needs someone to help him with the radio. Do
you know anything about planes?
Striker: Well I flew in the war, but that was years ago; I wouldn't know anything about it.
Randy: Would you go up, please?