Watch on: YouTube  Dailymotion  优酷
#1407 Two And A Half Men - Behoove, Ducks In A Row, Turkish Mayor: Respect The Robot
Hi, I'm Sarah, welcome to The Daily English Show.
Today we're studying a scene from a TV show called Two and a Half Men.
Two and a Half Men is an American sitcom that started being broadcast in 2003 and ended last month.
I think it was pretty funny in the earlier seasons and it petered out a bit towards the end.
Some of the humour I liked was when Jake couldn't understand certain words or expressions - because he was too young or not particularly smart. And the scene we're studying today is like that.
Charlie and Jake are in a car - Charlie is Jake's uncle - and they're driving to a restaurant to go on a double date.
And Charlie says to Jake: "Now, let's talk about your date. You need to get your ducks in a row before we get to the restaurant."
And Jake doesn't understand the expression: get your ducks in a row.
To get or have one's ducks in a row is an expression which means: to get or have everything organized; to be prepared.
Here's an example of the expression used in a headline: Have your financial ducks in a row before spring hits. That's an article in the Alberta Farmer Express advising farmers about the financial documents that they need to prepare.
Jake is confused about the expression because, he says, you can't line up ducks in a row. He says: "They're ducks. They move willy-nilly."
I really like the word willy-nilly. Willy-nilly means: without direction or planning or whether one likes it or not.
Here's an example of how to use willy-nilly in a sentence. This is from an article talking about how to use semicolons.
To be clear, you shouldn't use a semicolon willy-nilly in place of a period; use it to indicate a continuation of a thought within the sentence, a particularly close link between two independent clauses or a subtle if undefined relationship between them.

Kia ora in Stick News today a mayor in Turkey is being sued after he erected a huge statue of a robot.
Ankara is the capital city of Turkey.
Melih Gökçek has been the mayor of Ankara for the past 21 years.
On the first of April a statue of a giant robot was erected at a crossroads in the city.
The mayor is now being sued for wasting public money.
According to Today's Zaman, the mayor has previously posed in front of giant robots and published the photos on Twitter, asking his followers, "Which robot is more handsome?"
The mayor released a statement saying the robot was more clever than the people who sued him. He said: "Respect the robot."
And that was Stick News for Monday the 13th of April.
Kia ora. 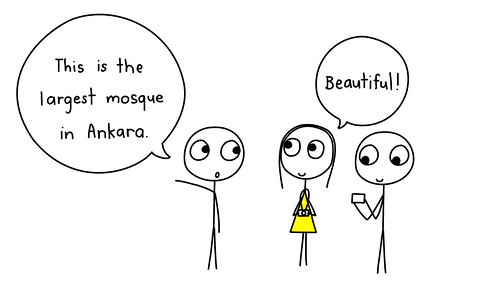 This is the largest mosque in Ankara.
Beautiful. 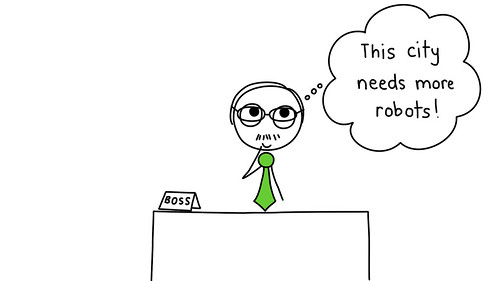 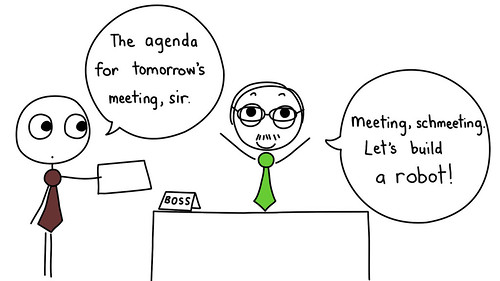 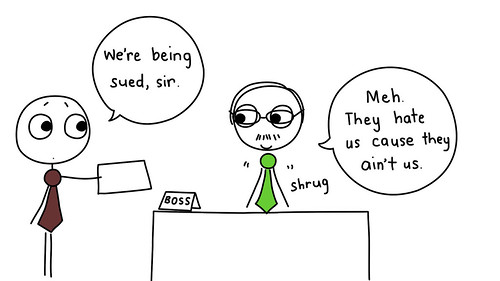 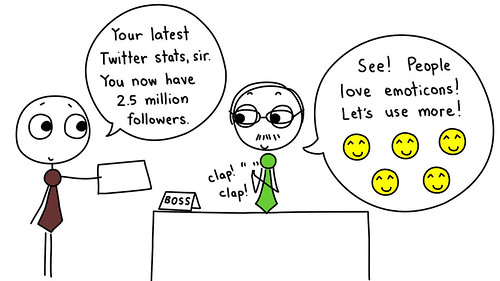 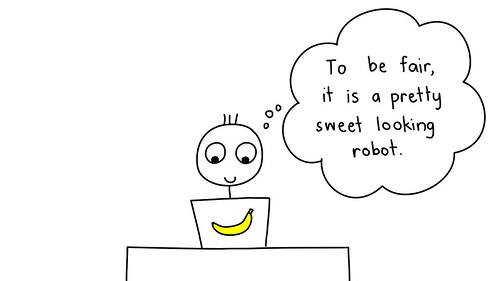 To be fair, it is a pretty sweet looking robot.
Drawings on Flickr

Charlie: Now, let's talk about your date. You need to get your ducks in a row before we get to the restaurant.
Jake: What do you mean?
Charlie: Well, if this little girl's important to you, it would behoove you to have a plan.
Jake: Behoove?
Charlie: It would benefit you.
Jake: Oh, yeah sure. What was that thing about ducks?
Charlie: It's just an expression.
Jake: Well, it's confusing.
Charlie: Sorry.
Jake: You can't get 'em in a row.
Charlie: I know, I know, now just listen to me.
Jake: They're ducks.
Charlie: Right.
Jake: They move willy-nilly.
Charlie: Shut up!
Jake: Whoa, it would behoove you to speak nicer to me.

ESL Video Quiz: #1407 Comprehension
ENDING
And that was The Daily English Show. I think one of the best ways to remember a new word or expression is to try and use it in a sentence. So, please leave a comment under this video using one of the words or expressions that we studied today: to get or have one's ducks in a row, willy-nilly or behoove.
Good luck. And I'll see you tomorrow. Bye!
NOTES
I said Two and a half Men ended "last month". I should have said "two months ago".
"peter out" means "diminish or come to an end gradually"
When I said Two and a half Men "petered out a bit towards the end" I mean that it got worse in the later seasons. I am saying this in an understated way ... I really think it was terrible after Charlie Sheen left the show.
Today's conversation is from Two and a Half Men, Season 5 Episode 14. Starts at 10m05
LINKS
Behoove - Forvo
Behoove - World Wide Words
Show intro
track: Nothing In The Dark  by: Josh Woodward  licence: CC BY 3.0
Stick News intro
track: Pyramid  by: Capashen  licence: CC BY-SA 3.0
sound: static  by: Joel Gerlach  licence: CC0 1.0
video: static  by: REC Room  licence: CC BY 3.0
sound: bell  by: kaonaya  licence: CC0 1.0
Word Of The Day intro
sound: plane  by: Ben Shewmaker  licence: CC BY 3.0
track: Prá Hermeto  by: Ruben Ferrero  licence: CC BY-SA 3.0
Conversations With Sarah intro
sound: bubbles  by: Razzvio  licence: CC BY 3.0
Question Answer intro
sound: chalk  by: thavis360  licence: CC0 1.0
Question Answer + Ending
track: All Blues by: The James Quintet licence: CC-SA BY 3.0