Watch on: YouTube  Dailymotion  优酷
#1403 Crafting A Joke, I Am A Kennedy - Google Me, Bit, Bill Burr
Hi, I'm Sarah, welcome to The Daily English Show.
Today we're studying a video from the Open University. They have a lot of really interesting videos on their YouTube channel.
Including this one which is an interview with a comedian called Isy Suttie.
The title of the video is: Crafting A Joke with Isy Suttie.
To craft means to make something using special skills. You make some toast, but you wouldn't say you craft some toast, because making toast doesn't take any special skill. But you could say that this bird is crafted out of wood and some kind of metal. Maybe copper or brass? I don't know. But you could say that it's crafted because it takes some special skill to make it.
One thing that Isy says in the video about crafting jokes is that "the best thing to do is have the final reveal, or the most important element of the punchline ... at the very end of the sentence".
And she gives an example of a bit, or a joke that she tells about asking her mother if she's adopted. So she says to her mother that she thinks she might be adopted for various reasons. And her mother says to her: "No, of course you're not adopted; we never would've chosen you."
So the joke is that at first it seems like the mother is reassuring her and she seems nice and supportive ... and then the punchline is that she says something horrible - if she did adopt someone she would've chosen someone else.
So the point Isy is making is that it's important to have that you right at the end of the sentence and not to have anything after it.

Kia ora in Stick News today the daughter of the nephew of former President Kennedy got upset after she was refused entry to a nightclub in New York.
Kyra Kennedy is related to John F Kennedy, the 35th President of the United States.
Recently Kyra decided to go to a club in New York.
In the United States the drinking age is 21, so you're supposed to be 21 to get into most clubs.
Kyra is only 19, so she attempted to use her 26-year-old sister's ID, but she couldn't remember the date of birth - and was caught looking it up on Wikipedia.
When the club refused to allow her in, she allegedly threw a tantrum. She screamed, "I am a Kennedy, Google Me!"
And that was Stick News for Thursday the 12th of March.
Kia ora. 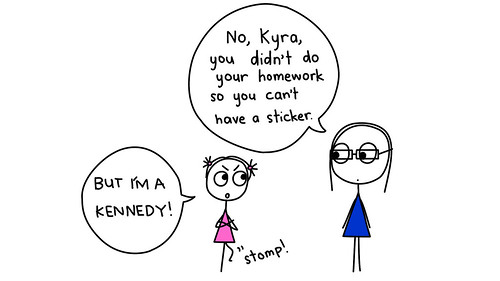 No, Kyra, you didn't do your homework, so you can't have a sticker.
BUT I'M A KENNEDY!
stomp! 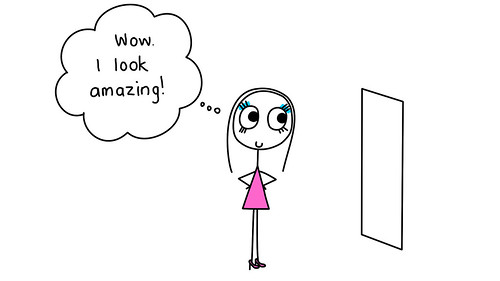 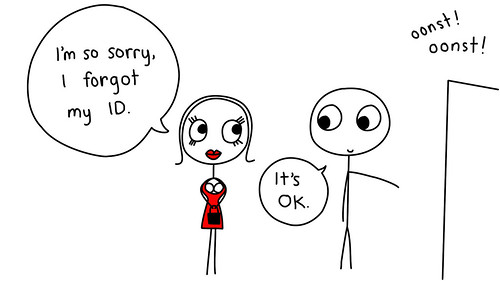 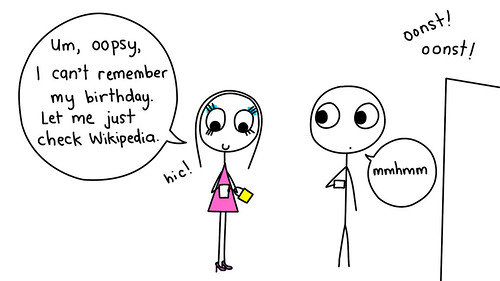 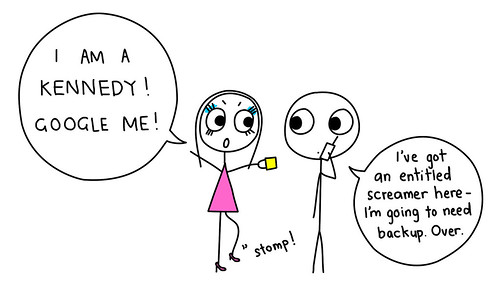 I AM A KENNEDY! GOOGLE ME!
stomp!
I've got an entitled screamer here - I'm going to need backup. Over.
Drawings on Flickr

Today's word is bit.
In the video, Isy says: "I've got this bit where I say that I asked my mum if I might be adopted."
In comedy, a bit is a piece of material from a comedian's show or routine.
If you see a stand-up comedian perform, afterwards you might talk about a bit that you particularly enjoyed.
For example, my favourite comedian is Bill Burr, and I really like his bit about motherhood being the difficult job on the plant.
What's a bit that you love?

Kim: Who did you say was your favourite comedian?
Sarah: Bill Burr. Have you heard of him?
Kim: No. Is he from New Zealand?
Sarah: No, he's from the States. He's originally from Boston - not the formerly dodgy area which everyone assumes, but some other non-dodgy area. And he now lives in Los Angeles with his wife Nia. And they've just finished renovating the downstairs of their house because they had some kind of water damage ...
Kim: Wow, how do you know all that? Do you know him?
Sarah: No, not personally. I just listen to his podcast.
Kim: What kind of podcast is it?
Sarah: It's just him rambling on about stuff like ... his house and travelling and comedy. It's great. He's hilarious.

ESL Video Quiz: #1403 Comprehension
ENDING
And that was The Daily English Show.
If you use Facebook, you can follow us here. We post the show to Facebook every day, so that's one way you can watch the show.
You can can also go directly to YouTube or Dailymotion or go to our site: thedailyenglishshow.com.
See you tomorrow. Bye!
NOTES
Here's an example of using the verb craft for food: Rihanna cut the top off her carefully crafted MAC lipstick cake.
back up or backup?
http://grammarist.com/usage/back-up-backup/
http://public.wsu.edu/~brians/errors/backup.html
http://www.merriam-webster.com/dictionary/backup
LINKS
today's news
Transcript:
I think what makes something funny overall is, erm, an element of surprise. So, that you set something up and then you reveal... I suppose that's how 'pull back and reveal' got coined, but I think it's to do with subverting the audience's expectation. So, that can work in so many different ways. Erm, I think, in stories it can work by building; you can build and build and build and then just reveal something that the audience wouldn't have seen coming, and with one-liners as well it is exactly the same principle.
Language is about the only thing that you've got, erm, with comedy. I mean, you've got your body and your face and you can, kind of, use it to express yourself, but it really starts and ends with language, and the most important thing is to be specific and clear and never let the audience lose track of, of what you're saying.
And s-, I used to think, when I started out, that it was better not to be specific, so that the audience felt involved and, so if you did something generalised they'd all be able to, kind of, get on board, but actually the more specific you are the better. I don't mean surreal, but I mean just talking about a concrete thing. For example, it's better to talk about a seagull than a bird, and they can all picture it.
Erm, but language itself, when it comes to the punchline, is so important, and I think, the, the best thing to do is have the final, er, the final reveal, or the most important element of the punchline, or the noun, erm, or the actual, sort of, hub of it, at the very end of the sentence, so that... that's why it's called a punchline, I guess, 'cause you, sort of... But, I-, you can, erm, you can, kind of, erm, dilute it if you add something after that you don't need. So, for example, I've got this bit, erm, where I say that I asked my mum if I might be adopted because I've always thought that I might be, for various reasons, like me looking Jewish and them all liking Shredded Wheat and stuff and I don't like Shredded Wheat – nothing against Shredded Wheat, but I just don't like it. And, erm, that I sit my mum down and say, er, am I adopted, and it's quite a frank discussion, and she says, "No, of course you're not adopted; we never would've chosen you." Erm, so, I suppose the idea with that is that she's reassuring me initially, and the audience thinks, "Oh, what a nice mum, she's..." and then the reveal is that she'd rather have any daughter other, other than me. So, the 'you'; it's very important that the 'you' comes last in that.
CREDITS
Question Answer + Ending
track: If The Blues Were Some Other Color by: The James Quintet licence: CC-SA BY 3.0
Show intro
track: Nothing In The Dark  by: Josh Woodward  licence: CC BY 3.0
Stick News intro
track: Pyramid  by: Capashen  licence: CC BY-SA 3.0
sound: static  by: Joel Gerlach  licence: CC0 1.0
video: static  by: REC Room  licence: CC BY 3.0
sound: bell  by: kaonaya  licence: CC0 1.0
Word Of The Day intro
sound: plane  by: Ben Shewmaker  licence: CC BY 3.0
track: Prá Hermeto  by: Ruben Ferrero  licence: CC BY-SA 3.0
Conversations With Sarah intro
sound: bubbles  by: Razzvio  licence: CC BY 3.0
Question Answer intro
sound: chalk  by: thavis360  licence: CC0 1.0
Photo
toast by Peter aka anemoneprojectors licence: CC BY-SA 2.0