I saw this in January at the Academy here in Auckland. By the way, if you're ever in Auckland on a Wednesday night - tickets are only 5 bucks at the Academy on Wednesdays - which is a very good price.
I loved Nightcrawler. It was the best movie I've seen in ages. I thought Jake Gyllenhaal was brilliant. He played the creepy character really well.
The movie's about a guy called Lou who sells footage of accidents and crime to a TV news station.
He seems to be a sociopath - or maybe a psychopath - I'm a little confused about those two terms. Anyway, he's very creepy. He lacks remorse and empathy. And he manipulates people to get what he wants.
One way the creepiness of his character is conveyed is through the use of his oddly formal language. The conversation we're studying is between Lou and a guy called Joe, who's a rival cameraperson. And Joe suggests that they work together.
He says: "I'm talking about putting some heavy digits in our pocket, bruh."
Which is an informal way of saying: "We're going to make a lot of money." Bruh is a variation of bro.
And Lou replies: "Thank you for offering me the position, but working for myself is more in line with my skills and career goals."
It is a little strange to reply to such informal language with more formal language like this. And this contrast of the level of language formality, or register - along with his delivery and what the audience knows about his skills and career goals - makes this line beautifully creepy.

Kia ora in Stick News today the Drug Enforcement Administration in the United States say they are worried about stoned rabbits.
In the United States, depending on the state, cannabis is either legal, illegal or kind of legal.
The Washington Post reported that the state of Utah is is considering a bill that would allow patients with certain debilitating conditions to be treated with edible forms of marijuana.
However, not everyone is enthusiastic about the proposed law.
A DEA agent who is a member of the marijuana eradication team in Utah, said that he was worried about the environmental costs associated with large-scale weed cultivation.
He said that at some illegal marijuana grow sites he saw rabbits that had cultivated a taste for marijuana. He's quoted as saying: "One of them refused to leave us, and we took all the marijuana around him, but his natural instincts to run were somehow gone."
And that was Stick News for Tuesday the 10th of March.
Kia ora. 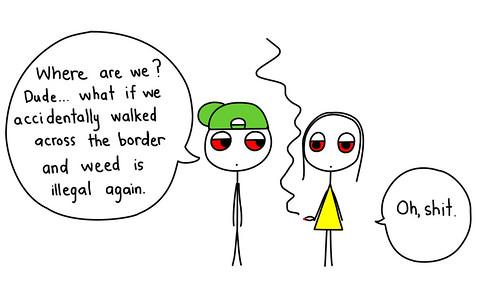 Where are we? Dude ... what if we accidentally walked across the border and weed is illegal again.
Oh, shit. 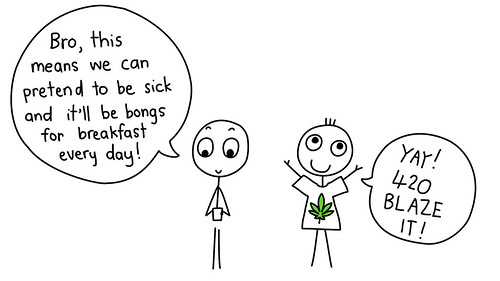 Bro, this means we can pretend to be sick and it'll be bongs for breakfast every day.
YAY! 420 BLAZE IT! 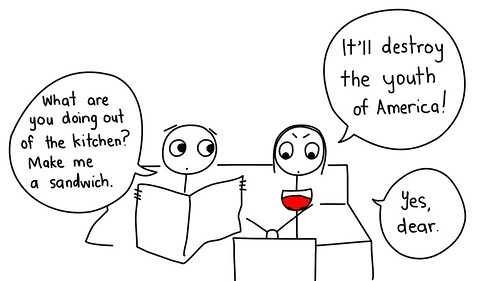 It'll destroy the youth of America!
What are you doing out of the kitchen? Make me a sandwich.
Yes, dear. 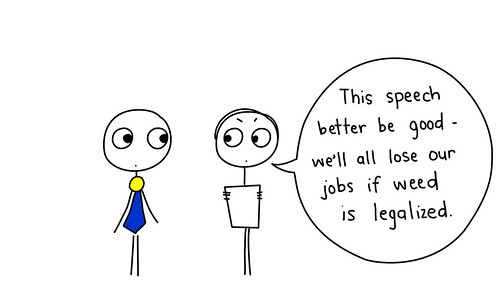 This speech better be good - we'll all lose our jobs if weed is legalized. 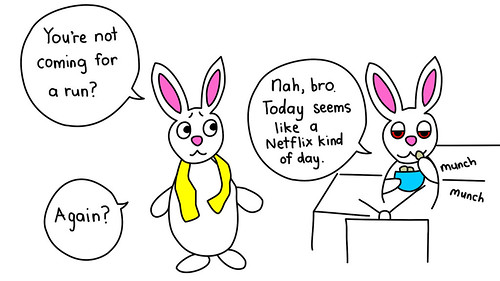 You're not coming for a run?
Nah, bro. Today seems like a Netflix kind of day.
munch, munch
Again?
Drawings on Flickr

Today's word is tag team.
Tag team has a few meanings.
If you search "tag team" on Google images, you'll probably see lots of pictures of wrestling.
Because a tag team is a pair of wrestlers who fight as a team, taking the ring alternately. One fights, comes out, the next one goes in and fights.
Tag team has another meaning: According to the Concise Oxford: <informal,> a pair of people working together.
And that's what Joe means in the conversation we're studying. He's proposing to Lou that they work together. So that when they get a call about an accident or a crime, they send out two teams of camera crews.
He says: "You want to be on the inside of this, man, because I'm going to be tag teaming every call."
It could be worth knowing that tag team also has a sexual meaning. The top definition on urban dictionary is: for a few guys (usually friends) to take turns having sex with a particular girl in one sexual session.
You may not ever need to use that term, but it's useful to know that there could potentially be a misunderstanding if you say, "Let's tag team."
So if you want to be on the safe side, just stick with: "Let's work together."

Joe: I'm talking about putting some heavy digits in our pocket, bruh.
Lou: Thank you for offering me the position but working for myself is more in line with my skills and career goals.
Joe: Take a few days to think about it.
Lou: No. You'll need to hire someone else and I don't want to hold up the process.
Joe: You want to be on the inside of this, man, because I'm going to be tag teaming every call.
Lou: You keep talking like it's something that I may be interested in, but I'm not.
Joe: You don't even understand the offer.