Today we’re studying a video called Lightning Versus Lightening from The Grammar Girl channel on YouTube.

And she’s also written a book. This is her site.

In this video she explains the difference between lightning and lightening.

Do you ever get those two words mixed up? I guess it’s more common to get them confused if you live in North America because they have the same pronunciation in American English.

Lightning, with no e, is the stuff that flashes in the sky, or that people draw on their faces. And lightening, with an e, is what happens when you bleach your hair.

If you do have trouble remembering which is which, Grammar Girl has a good tip. She says to think of a lightening bolt zapping out the letter e.

This year ten teams competed in the Ugly Dance World Cup in Germany.
The winning group was from a town in northwestern Germany.
Organizers said the group won because of their epic ugliness, horrible appearance and their signature move - the Shy Dance.

And that was Stick News for Thursday the 28th of October.
Kia ora. 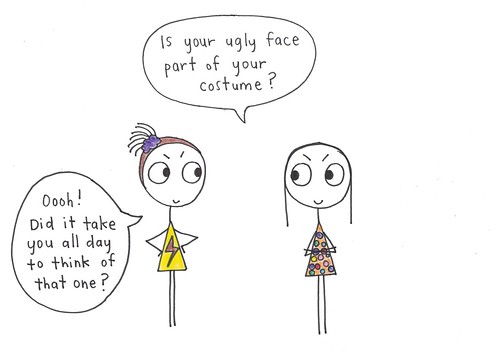 Is your ugly face part of the costume?
Oooh! Did it take you all day to think of that one? 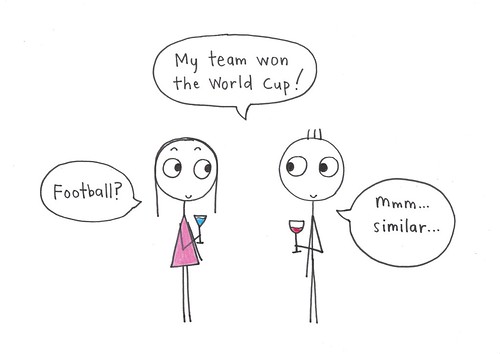 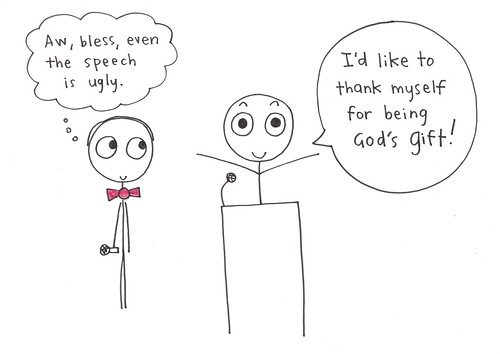 I’d like to thank myself for being God’s Gift!
Aw, bless, even the speech is ugly.

Drawings on Flickr.
Word of the Day
Today’s word is espresso.
Another one of The Grammar Girl’s videos is called: Is It Espresso or Expresso?
And she says it should be espresso. And the word comes from the Italian for pressed out.
But in the Concise Oxford Dictionary under espresso it has in brackets (also expresso). So I guess the x is also acceptable. But still, I would recommend using an s, especially if you’re writing it on a board in a café - I think it looks kind of amateur to use an x.
Question Time
We filmed today’s question time in a suburb in Auckland called Parnell.
In New Zealand this vegetable is usually called an eggplant or an aubergine – but I wasn’t sure which one was more common. So we decided to take one to the streets and ask people: What do you usually call this?
Zucchini? No? What is it? I don’t know.
Um, well, it’s either an eggplant or an aubergine.
And which one do you usually call it?
Eggplant.
Ah, either an eggplant or an aubergine.
And what do you usually call it?
Probably an eggplant.
Eggplant.
It’s an eggplant, right?
Um, an eggplant … or an aubergine.
Which one do you usually use?
Usually eggplant.
Ah, pomegranate. No, I’m just making that up – I have no clue.
I actually cooked two of these in the last week. He’s, ah, crazy. It’s eggplant. We call it eggplant in Los Angeles.
I call that an eggplant.
conversations with sarah
#867 Why not aubergine?
Step 1: Repeat Dylan’s lines.
Step 2: Read Dylan’s lines and talk to Sarah.
Dylan What do you usually call it?
Sarah These days I usually say eggplant.
Dylan Why not aubergine?
Sarah I think I used to say aubergine, but then when I want to Japan most people seemed to learn eggplant, so when I was speaking English I usually said eggplant, and now I just say it out of habit I guess.
Dylan What is it in Japanese?
Sarah Nasu.
ESL Video Quiz: #1348 Lightning Vs Lightening
ending
And that was The Daily English Show. If you’d like to subscribe to the show as a podcast, you can find out how to do that one this page.
See you tomorrow, bye!
Lightning Versus Lightening - TRANSCRIPT
Hi, it’s Mignon Fogarty with your Grammar Girl bonus track number 35.
One thing I like about living in Reno is the cool lightning we get in the summer.
I find those bolts of light from the sky to be endlessly entertaining.
The word lightning is quite old. The Oxford English Dictionary dates its first use as a noun to describe light from the sky to 1377. Back then in Middle English spelling was dramatically different from our modern English spelling. Lightning was spelt with a y and a letter we don’t even use today, called the yogh, that kind of looks like the number 3, and eventually got replaced with our current letters gh. So way back in the 1300s, lightning was spelled l-i-(yogh)-t-n-y-n-g-e.
Today there are two forms of the word lightning and people often get them confused. Dictionaries say that long ago the two words were spelled the same. They both come from the word light which goes back even further, all the way to Old English before the year 900.
But today, the lightning we’ve been talking about, the bolt from the sky, doesn’t have an e. It’s spelled l-i-g-h-t-n-i-n-g. The other kind of lightening, what women do when they get their hair bleached for example, is spelled with an e: l-i-g-h-t-e-n-i-n-g.
Lightning without an e can also be a metaphor for something that’s fast. Games, games shows, and even TV shows often have a lightning round. One of the earliest game shows to have a lightning round was the show Password in 1961. And Lightning McQueen was the name of one of the racers in the movie Cars.
Two of my favourite quotations about lightning come from Mark Twain. The first quotation is about writing. He said, “The difference between the right word and the almost right word is a really large matter. It’s the difference between lightning and a lightning bug.
The second quotation is about humanity and I like it despite Twain’s rough word choice. He said, “The trouble ain’t that there’s too many fools but that lightning ain’t distributed right.”
So don’t be a fool, and remember to spell lightning properly. If you’re writing about someone lightening hair, it’s spelled with an e. But if you’re writing about Percy Jackson and the Olympians, the lightning thief, it’s spelled without the e.
My agent, Laurie Abkemeier, came up with a good memory trick. She said just think of a lightning bolt zapping out the letter e. Thanks Laurie, and thanks all of you for watching.
links
today's news
Grammar Girl - Twitter
music
show start
artist: Kevin MacLeod
track: Future Cha Cha
from: Brooklyn, NY, United States
artist site
WOD start
artist: DJ iPep's
album: Home Mix 2007
track: Game Toy
from: Évreux, France
album at Jamendo
artist at Jamendo
artist site
cws start
artist: Kevin MacLeod
track: The Jazz Woman
from: Brooklyn, NY, United States
artist site
qa start
artist: ioeo
album: triptracks
track: triptrack2
from: Saint-Raphaël, France
album at Jamendo
artist at Jamendo
qa bgm
artist: Antonio Sacco
album: The Tribal Sin Vol.8
track: jungle love
from: Rieti, Italy
album at Jamendo
artist at Jamendo
artist site