For some reason I signed up to a newsletter for a local bar and they send out a weekly newsletter encouraging you to come to the bar and part of it says: with nothing to loose and a great night out to gain.

Can you see the mistake there?
Yes, lose only has one o. This is actually a mistake I made on one of the early shows - it was back in ‘06 I think.

So, please remember, lose has one o and loose has two.

If you lose weight, your ring might become loose and then you could lose it.

click here
Today I recommend you check out an article on Mashable called: 35 Entertaining 404 Error Pages.
Do you know what a 404 message is?
It is an: HTTP standard response code indicating that the client was able to communicate with the server, but the server could not find what was requested.
So, yeah, it’s basically the message that you get when the page you’re looking for has moved or disappeared or something.
I think most sites have a fairly standard message - but they’ve listed some of the funny ones.
I think the one on homestarrunner.com is pretty funny. It says: Boy, you sure are stupid. Were you just making up names of files or what? I mean, I’ve seen some pretend file names in my day, but come on! It’s like you’re not even trying.
STICK NEWS
Kia ora in Stick News today apparently Bert and Ernie have come out of the closet.
Bert and Ernie are puppets on the children’s TV show Sesame Street.
They live together an apartment and used to sleep in the same bed.
There’s been speculation for years that Bert and Ernie are gay, but the program’s makers have always denied this.
According to news reports, some people are now convinced that the Muppets have come out via Twitter.
Ernie tweeted: Ever notice how similar my hair is to Mr T's? The only difference is that mine is a little more 'mo', and a little less 'hawk'."
And that was Stick News for Wednesday the 27th of October.
Kia ora. 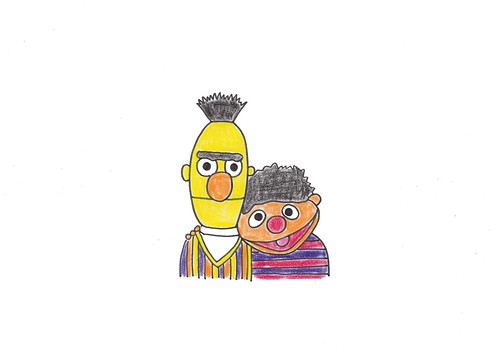 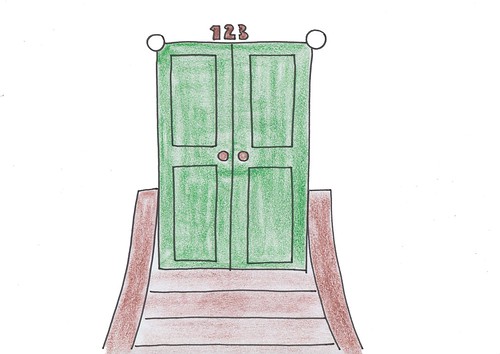 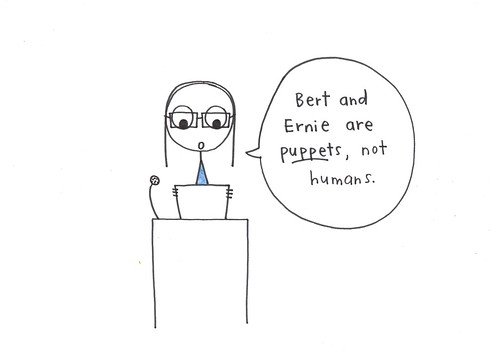 Bert and Ernie are puppets, not humans. 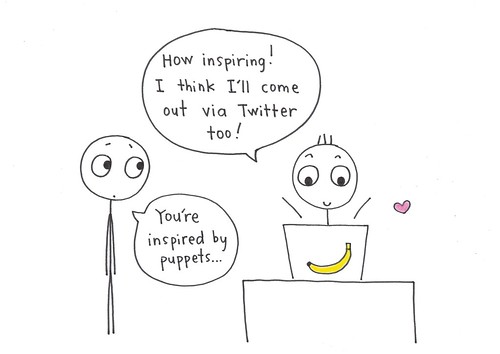 How inspiring! I think I'll come out via Twitter too!
You're inspired by puppets ... 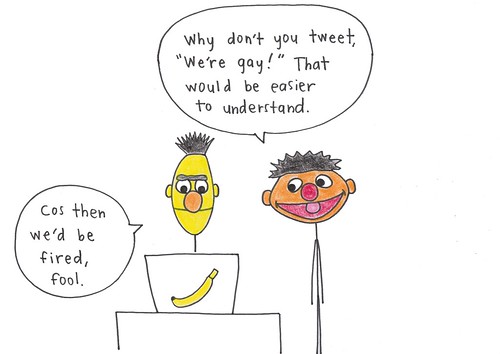 Why don't you tweet, "We're gay!" That would be easier to understand.
Cos then we'd be fired, fool.
Drawings on Flickr.
Word of the Day
Today’s word is cakeage.
The other day I went to a restaurant to celebrate my sister’s birthday and I made her a cake and I brought it to the restaurant and they charged us cakeage.
It was $1.50 per person, which I thought was pretty reasonable.
The charge is for the work they have to do doing the dishes and also for the loss I guess because if you bring in your own cake, then you’re not going to order desert.
Have your heard the word cakeage before? You won’t find it in the dictionary because it’s a new word. I’m not sure when it was first used - I heard it for the first time this year. It follows the pattern of the word corkage, which is a similar thing.
corkage n. a charge made by a restaurant or hotel for serving wine that has been brought in by a customer
Have you ever been charged cakeage? If so, how much were you charged?
conversations with sarah
#866 Ten swimming pools?!
Step 1: Repeat Alice’s lines.
Step 2: Read Alice’s lines and talk to Sarah.
Alice Where did you go for dinner?
Sarah We went to an Indian restaurant in a suburb in Auckland called Parnell.
Alice Is that near where you live?
Sarah No, it’s a long way away actually. Parnell is near the CBD.
Alice Are there lots of restaurants there?
Sarah Yeah, there are. It’s a popular restaurant, bar, café kind of area. The prime minister lives in Parnell too … in a mansion with, like, 10 swimming pools.
Alice Ten swimming pools?!
Sarah Well, maybe not 10. Probably just one actually, come to think of it. But it’s a pretty big house.
Alice Have you been there?
Sarah Yeah, John invites me round for dinks all the time. No, I just saw a picture in the paper.
ESL Video Quiz: #1347 Lose Vs Loose
ending
And that was The Daily English Show. If you’d like to check out the links to the stuff I’ve talked about on the show today, please visit thedailyenglishshow.com
See you tomorrow. Bye!
links
today's news
music
show start
artist: Kevin MacLeod
track: Future Cha Cha
from: Brooklyn, NY, United States
artist site
click here start
artist: #NarNaoud#
album: Green Vision
track: Oriental Standing
from: Gironde, France
artist at Jamendo
album at Jamendo
artist site
WOD start
artist: DJ iPep's
album: Home Mix 2007
track: Game Toy
from: Évreux, France
album at Jamendo
artist at Jamendo
artist site
cws start
artist: Kevin MacLeod
track: The Jazz Woman
from: Brooklyn, NY, United States
artist site
qa start
artist: ioeo
album: triptracks
track: triptrack2
from: Saint-Raphaël, France
album at Jamendo
artist at Jamendo
qa bgm
artist: Antonio Sacco
album: The Tribal Sin Vol.8
track: jungle love
from: Rieti, Italy
album at Jamendo
artist at Jamendo
artist site

More in this category: « #1346 A Quiet Night, Oi! Right You Are, Walkman Retires In Japan, Wakey-Wakey #1348 Lightning Vs Lightening, Ugly Dance, Espresso Vs Expresso, Eggplant Vs Aubergine »