#1346 A Quiet Night, Oi! Right You Are, Walkman Retires In Japan, Wakey-Wakey
Hi, I’m Sarah, welcome to The Daily English Show.
Today we’re studying a clip from a short film called A Quiet Night. This film was made in New Zealand in 1999.
Unfortunately I don’t know where you can watch the whole film, but there are a few interesting expressions to study in this excerpt.

A guy in the film yells out to a taxi, and he yells: Oi!

Oi is an informal expression used to attract somebody’s attention. And I think it’s often used in an angry way – for example if you see someone doing something that they shouldn’t be doing, like breaking into your car, you could say:Oi, what are you doing?!

So the guy in the movie gets into the taxi and he asks to be taken to Lyttelton, which is a small town near Christchurch. And the taxi driver says: Right you are.

Right you are is an old fashioned idiom which is used to show that you accept a statement or an order.

For example, in a café:
I’ll have two glasses of orange juice, please.
Right you are.

It means the same thing as OK or sure.
STICK NEWS

The first Walkman was built in 1978 by an engineer in Japan.
Since then Sony has sold around 200 million units.
Sony has announced they’ve stopped producing The Walkman in Japan and sales in Japan will end once the last batch disappears from the stores.

And that was Stick News for Tuesday the 26th of October.
Kia ora. 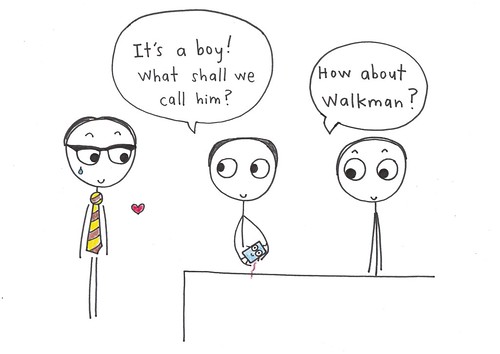 It’s a boy! What shall we call him?
How about Walkman? 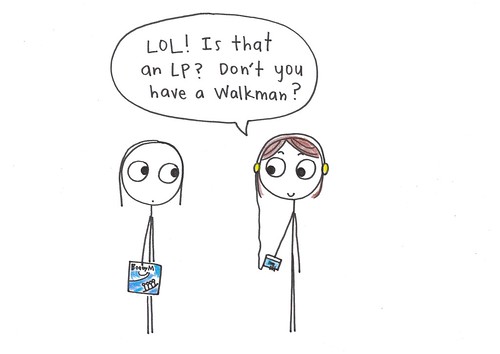 LOL! Is that an LP? Don’t you have a walkman? 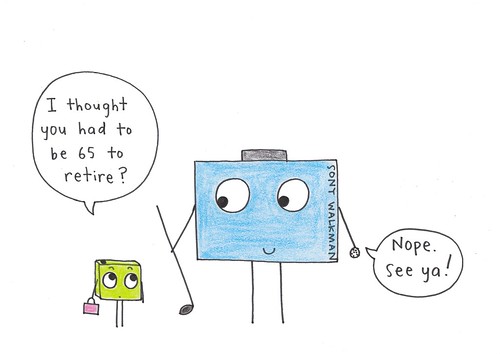 Drawings on Flickr.
Word of the Day
Today’s word is wakey-wakey.
Wakey-wakey is an informal exclamation which is used to tell someone to wake up.
In today’s film, the taxi driver thinks that his passenger is asleep so he says to him:
Come on mate, wakey-wakey, nearly home.
So if you’re a student, or a teacher, the next time someone falls asleep in class, try poking them and saying: Wakey-wakey!
conversations with sarah
#865 Where was it made?
Step 1: Repeat Jimmy’s lines.
Step 2: Read Jimmy’s lines and talk to Sarah.
Sarah I did some work on that film.
Jimmy Really? What did you do?
Sarah Publicity.
Jimmy Where was it made?
Sarah In Christchurch. I was studying journalism there at the time.
Jimmy Did you see the finished film?
Sarah Yeah, I did. I saw it at the Civic actually, it was during the film festival in 2000. It was quite cool seeing my name in the credits at the Civic.
ESL Video Quiz: #1346 Comprehension
ending
And that was The Daily English Show. If you have a suggestion for a film – or a scene from a film – you’d like us to study, please leave a comment, or send us an email: This email address is being protected from spambots. You need JavaScript enabled to view it.
See you tomorrow. Bye!
A Quiet Night - excerpt - TRANSCRIPT
Oi!
Lyttelton.
Lyttleton?
Yeah.
Right you are.
Go, man. Go!
So you had a good night?
Fuck!
Looks like something pretty serious.
Warm night for this time of year.
I said it’s a warm night for this …
Excuse me.
Where to now, mate?
Hey mate, you awake?
Come on mate wakey-wakey, nearly home.
links
today's news
music
show start
artist: Kevin MacLeod
track: Future Cha Cha
from: Brooklyn, NY, United States
artist site
WOD start
artist: DJ iPep's
album: Home Mix 2007
track: Game Toy
from: Évreux, France
album at Jamendo
artist at Jamendo
artist site
cws start
artist: Kevin MacLeod
track: The Jazz Woman
from: Brooklyn, NY, United States
artist site
qa start
artist: ioeo
album: triptracks
track: triptrack2
from: Saint-Raphaël, France
album at Jamendo
artist at Jamendo
qa bgm
artist: Antonio Sacco
album: The Tribal Sin Vol.8
track: jungle love
from: Rieti, Italy
album at Jamendo
artist at Jamendo
artist site