It’s mistake day today and I thought I’d tell you about a funny mistake on a TV news program in New Zealand.

Last-ditch is an adjective: used to describe a final attempt to achieve sth, when there is not much hope of succeeding.

And the example here is: She underwent a heart transplant in a last-ditch attempt to save her.

But instead of saying last-ditch bid, the presenter said last bitch did.

They’re talking about a court case and he said: His defense team has failed today in a last bitch did to avoid a retrial over the deaths in Dunedin in 1994.

This is a project which was organized by a French guy.
On the site it says: 5,000 interviews were filmed in 75 countries by 6 directors.
And they asked people about 40 questions, such as: What have you learnt from your parents? What do you want to pass on to your children? What difficult circumstances have you been through? And: What does love mean to you?

If you go to that site, you’ll see a whole lot of photos and if you click on one you’ll see a video, if there is one, related to that person.

Kia ora in Stick News today a former burglar invented a lock while he was in prison and is now installing the lock into the homes of crime victims for free.

A 29-year-old man in China was sent to prison for four years for burglary.
While he was in prison he invented a fingerprint recognition lock.
When he got out he set up a company to manufacture the locks and decided to install them for free in the homes of 100 victims of burglary to help repay for his sins.

And that was Stick News for Wednesday the 20th of October.
Kia ora. 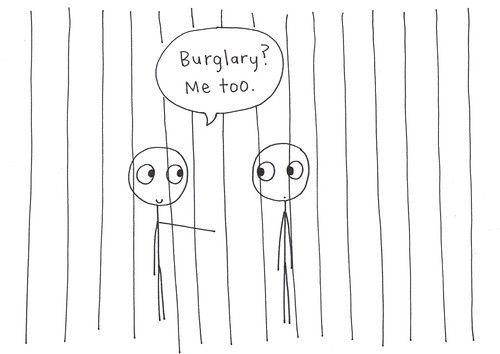 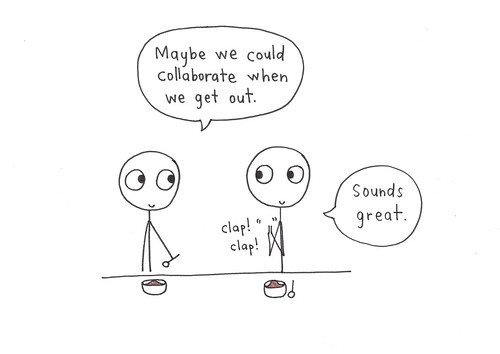 Maybe we could collaborate when we get out.
Sounds great. 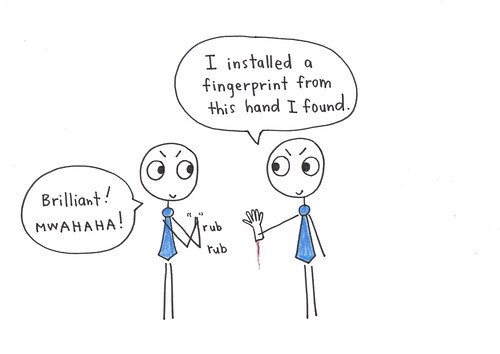 I installed a fingerprint from this hand I found.
Brilliant! MWAHAHA!

Drawings on Flickr.
Word of the Day
Today’s word is hypocrisy.
Last month we studied a song by: The Disposable Heroes of Hiphoprisy.
That word hiphoprisy is a word that they made up. It’s a combination of hip hop and hypocrisy.
Hypocrisy is: (disapproving) behaviour in which sb pretends to have moral standards or opinions that they do not actually have.
And a hypocrite is a person who says one thing and does the other.
Eliot Spitzer is a famous example of someone who many people called a hypocrite.
conversations with sarah
#861 What’s your first memory?
Step 1: Repeat Brad’s lines.
Step 2: Read Brad’s lines and talk to Sarah.
Brad What’s your first memory?
Sarah I have a few early memories, I’m not sure which one was first. But one of them was … well it’s a long story, but I played a trick on my friend and she got really upset.
Brad What did you do?
Sarah Well, we were too short to reach the door handle on the bedroom door – so we must have been quite young – and so there was a piece of string tied on to the door handle that we used to pull to open the door. And I climbed up onto a chest of drawers next to the door and I pulled the door open with the piece of string and I wound it round the door handle and then pushed the door closed and I was like, “Haha we’re trapped!” But we weren’t really because there were people in the lounge next door and all we had to do was knock on the door and they’d come and open it. But, yeah, she was really upset and started crying.
Brad Because she thought you were really trapped?
Sarah Yeah, I guess so. I just remember being really surprised that she would be upset, because I thought it was really funny.
ESL Video Quiz: #1340 Hippo, hypo
ending
And that was The Daily English Show. If you’d like to subscribe to our weekly update please go to thedailyenglishshow.com and you’ll see the place to subscribe on the left hand side.
See you tomorrow. Bye!
links
today's news
music
show start
artist: Kevin MacLeod
track: Future Cha Cha
from: Brooklyn, NY, United States
artist site
click here start
artist: #NarNaoud#
album: Green Vision
track: Oriental Standing
from: Gironde, France
artist at Jamendo
album at Jamendo
artist site
WOD start
artist: DJ iPep's
album: Home Mix 2007
track: Game Toy
from: Évreux, France
album at Jamendo
artist at Jamendo
artist site
cws start
artist: Kevin MacLeod
track: The Jazz Woman
from: Brooklyn, NY, United States
artist site
qa start
artist: ioeo
album: triptracks
track: triptrack2
from: Saint-Raphaël, France
album at Jamendo
artist at Jamendo
qa bgm
artist: Antonio Sacco
album: The Tribal Sin Vol.8
track: freedom
from: Rieti, Italy
album at Jamendo
artist at Jamendo
artist site