Fred is a character that was created by an American teenager and started on YouTube. And the channel’s now the 4th most subscribed channel on YouTube.

As it says in the trailer, Fred is a YouTube phenomenon. Do you know what a phenomenon is?

a person or thing that is very successful or impressive

So Fred is definitely a phenomenon.

In the videos, Fred’s character is 6, and in the movies he’s 15 … but I think he’s a bit more hyperactive and clueless than your usual 15-year-old.
At one point he gets confused by the phrase end of the line.
End of the line is an idiom which means that something is finishing. It’s the same as end of the road.
An example is: When she found out that Jim had been seeing another woman, it was the end of the line for their marriage.

In the movie a bus driver says, “End of the line!” And Fred thinks it means that it’s the end of his life and says, “You’re going to kill us?!”

But obviously, the bus driver means that it’s the end of the bus route and everyone has to get off the bus.

Kia ora in Stick News today a drunk Australian man had a shower in the wrong house.

A 42-year-old man from a town called Katherine in Australia went out for a few drinks.
He decided to have a shower when he got home, but he got the wrong house.
The woman who lived there woke up to the sound of someone having a shower downstairs.
She called the police who came and arrested her neighbour.

And that was Stick News for Tuesday the 19th of October.
Kia ora. 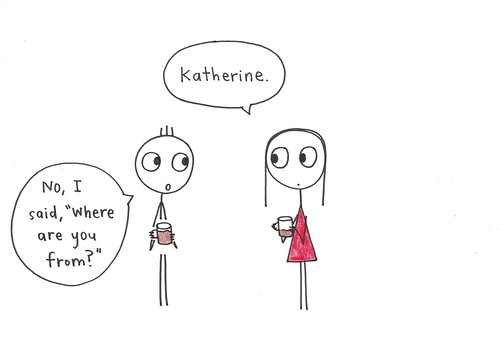 Katherine.
No, I said, “Where are you from?” 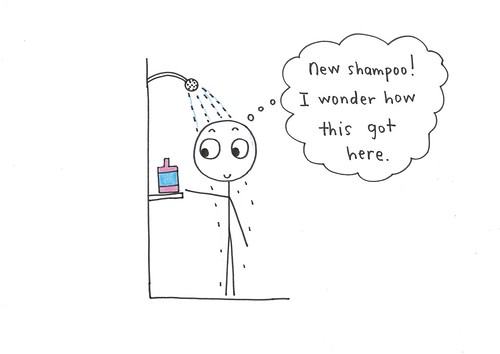 New shampoo! I wonder how this got here. 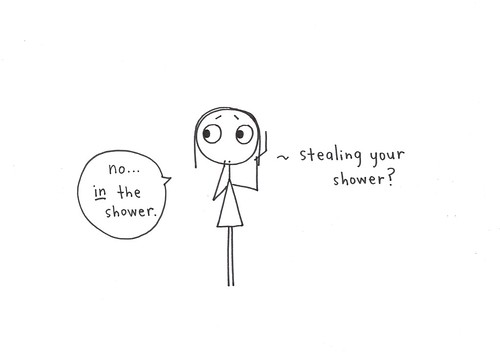 Stealing your shower?
No … in the shower.
Drawings on Flickr.
Word of the Day
Today’s word is quit.
In the trailer for Fred: The Movie a girl says at one point: Boys, quit staring.
In that case, quit means the same thing as stop.
The word quit isn’t usually used like that in New Zealand. I would usually say stop. I’d say: Boys, stop staring.
I would use the word quit to talk about leaving a job or stop doing a regular activity like a sport or a class.
For example: I quit my job because I hated my boss.
Or: I’m sick of playing soccer – I think I might quit.
One thing to remember though, is that if you say you quit your job – in New Zealand English anyway - it sounds negative, like you left because you hated it.
So if you want to sound neutral, use another word like leave or stop.
I left my job.
I stopped working for company X.
conversations with sarah
#860 End of the line!
Step 1: Repeat the bus driver’s lines.
Step 2: Read the bus driver’s lines and talk to Fred.
Bus driver End of the line!
Fred You're going to kill us?!
Bus driver No, it means you've got to get off.
Fred Oh.
ESL Video Quiz: #1339 Comprehension