The video we’re studying today is a clip from a New Zealand TV show called Breakfast, that was big news in New Zealand recently.

What happened was a TV presenter called Paul Henry was interviewing John Key - the prime minister of New Zealand - and they were talking about the Governor-General.

He said: It’s almost time, is it, for you to choose a Governor-General?

And the prime minister agreed that it was.

So, the current Governor-General is a New Zealander and he was born in New Zealand too. This is from Wikipedia: Satyanand was born and raised in Auckland to an Indo-Fijian and Anglo-Indian family. And this is what he looks like: 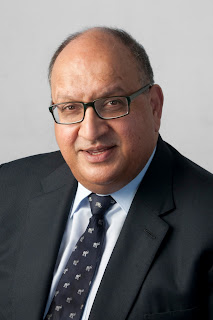 Paul Henry didn’t say what he thinks a New Zealander looks like, but he was clearly saying that the Governor-General doesn’t look like a New Zealander because he looks Indian.
Which is wrong, of course, because you don’t have to be a certain race or look a certain way to be a New Zealander.
But more importantly it’s very rude and disrespectful to the Governor-General, to suggest that he doesn’t look like a New Zealander. And it’s offensive to other Indian New Zealanders to suggest that they don’t look like New Zealanders because of their race.
So a lot of people complained about Paul Henry’s comments and he ended up resigning.
STICK NEWS
Kia ora in Stick News today the Kākāriki is New Zealand’s bird of the year.
The Kākāriki is a native New Zealand parakeet . It’s just been voted bird of the year in an annual contest run by Forest and Bird.
A Forest and Bird spokesperson said the Kākāriki was popular for its flamboyant dress sense.
She said the birds were gorgeous chatterboxes who sounded like they were always having fun.
And that was Stick News for Thursday 14th October.
Kia ora. 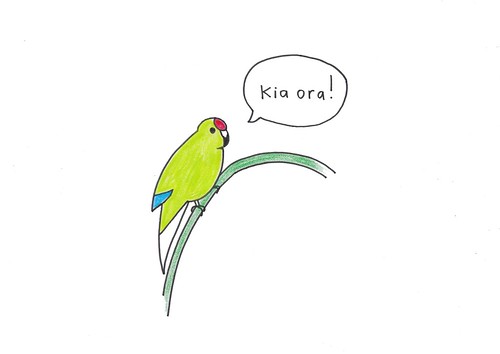 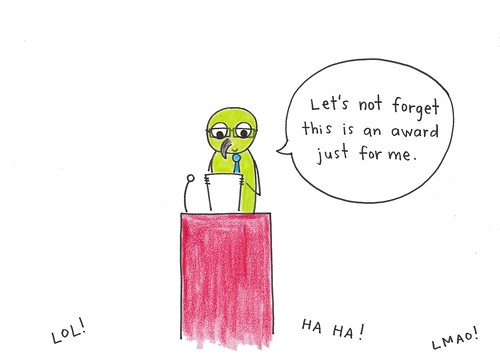 Let’s not forget this is an award just for me.
LOL! HA HA! LMAO! 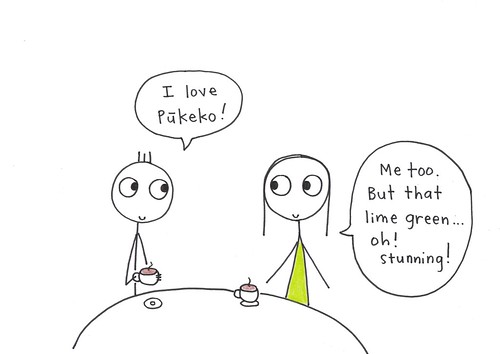 I love Pukeko!
Me too. But that lime green … oh! Stunning! 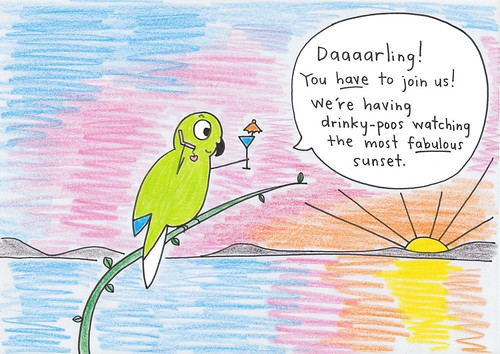 Daaaarling! You have to join us! We’re having drinky-poos watching the most fabulous sunset.
Drawings on Flickr.
Word of the Day
Today’s word is flamboyant.
This is a word from today’s news story. The Kākāriki has a flamboyant dress sense.
Flamboyant means: bright, colourful and noticeable … like the Kākāriki.
It also means: (of people or their behaviour) different, confident and exciting in a way that attracts attention.
Do you know anyone who you would describe as flamboyant?
I think Lady Gaga is someone you could describe as flamboyant.
Question Time
The New Zealand music awards were held on the 7th of October this year at Vector Arena in Auckland.
And for today’s question we asked people before the show: Who are you most exited about seeing tonight?
Shihad if they’re, if they’re here, I don’t know. I kind of came here last minute, so …
Ah, probably Kids of 88. (PJ - Running With Scissors)
Gin Wigmore actually, if she, if she performs, yeah.
The Shihad act at the end is terrific and they’re getting a legacy award, but Gin Wigmore, she did a terrific show.(David Slack)
This is really embarrassing, but Ronan Keating.
Midnight Youth … if they’re going to be here, yeah.
Ooh, it’s a tough one. Ooh, I don’t know. Everybody, everybody’s just so cool.
Pretty keen to see all the acts.
Ah, just come to see the whole lot really, just for a good night out.
J. Williams.
I’m not sure, because … just, I’m curious, this event.
Stan Walker.
Gin Wigmore.
I’m really excited about all the acts tonight. Um, really good to … I hope to see Stan Walker tonight, live, the brother representing. (Pikiteora Mura-Hita - Homai Te Pakipaki, Phatmatics)
Shapeshifter, definitely.
conversations with sarah
#857 Hence the name
Step 1: Repeat Simon’s lines.
Step 2: Read Simon’s lines and talk to Sarah.
Simon Is that show on at breakfast time?
Sarah Yeah, hence the name.
Simon Do a lot of people watch TV in the morning?
Sarah Yeah, I think they do, seems weird to me though - can’t imagine watching TV in the morning.
Simon So you’ve never watched that show?
Sarah No, but I’ve seen clips from it on the internet.
ESL Video Quiz: #1334 Comprehension

More in this category: « #1333 O For Awesome, Save The Words, Michelangelo Painting Behind Sofa #1335 Black Box By Stan Walker, Condoms Clog Drains At Games, In Vain »