#1332 Due Date, Man Locked In Pub, Uphill Vs Downhill, Grand Canyon Or Hoover Dam?
Hi, I’m Sarah, welcome to The Daily English Show. Today’s movie is called Due Date. It’s an American comedy about two guys who are driving across America so that one of the guys can be home in time for his child’s birth.

The guy’s names are Peter and Ethan and Ethan isn’t very clever, for example, he thinks the Grand Canyon is man-made, when it obviously isn’t.

So Peter gets very frustrated with Ethan and at one point he says that if he misses the birth of his child he’ll kill Ethan by wrapping his scarf around his neck and choking him.

Drastic is an adjective which means: extreme in a way that has a sudden, serious or violent effect on sth.
STICK NEWS
Kia ora in Stick News today a man in New Zealand called the police after he woke up to find himself locked inside a pub.
On Saturday the 9th of October at 5:30am a 42-year-old man woke up inside a pub in Central Otago.
He called the police and said he didn’t want to attempt to leave for fear of triggering the alarm.
NZPA reported that staff were baffled as to how they had missed the man when they closed at 3am.
And that was Stick News for Tuesday the 12th of October.
Kia ora. 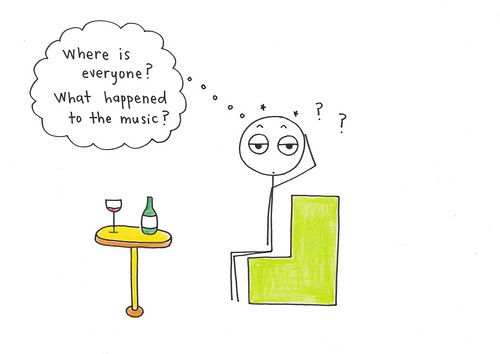 Where is everyone? What happened to the music? 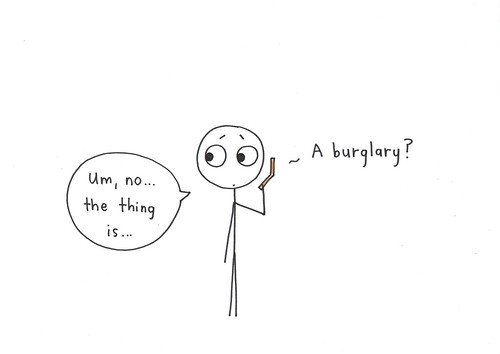 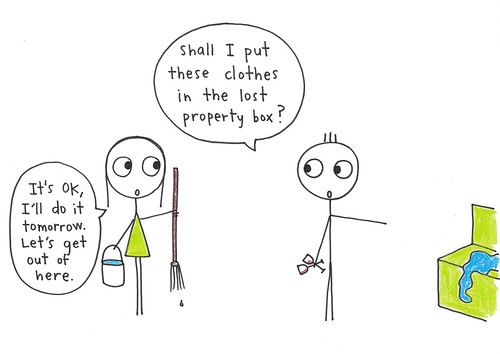 Shall I put these clothes in the lost property box?
It’s OK, I’ll do it tomorrow. Let’s get out of here.
Drawings on Flickr.
Word of the Day
Today’s word is uphill.
Uphill is an adjective which means sloping upwards.
And it also means difficult, for example, an uphill struggle.
The opposite of uphill is downhill.
So if uphill means difficult, does downhill mean easy?
Yes, it can mean easy – it means easy compared to what was before – but it can also mean for something to become worse.
There’s an idiom be all downhill which can be positive or negative depending on the context. But in today’s movie Ethan thinks the phrase is be all uphill and they have a bit of an argument about it, which goes like this:
My father always had a saying, “When a day starts like this, it’s all uphill from here.”

Uphill? No, it’s all downhill from here.

But it’s easier as you go downhill, so your Dad didn’t know what the fuck he was talking about.
conversations with sarah
#855 Also incorrect
Step 1: Repeat Ethan’s lines.
Step 2: Read Ethan’s lines and talk to Peter.
Ethan I could have sworn I read it was man-made.
Peter No, no, not correct. It's the Grand Canyon, not the Hoover Dam.
Ethan Well I know it’s not the Hoover Dam, that was built by the Pilgrims.
Peter Also incorrect.