Today I recommend you watch a video called: Sesame Street: Smell Like A Monster, if you haven’t already.

This is a parody of the Old Spice video that we talked about in July.

There have been many, many parodies made of that famous Old Spice ad, and the star of this parody is Grover who is a Muppet from the TV show Sesame Street.

You might know Grover by a different name. On his Wikipedia page, there’s a list of the different names he’s known by in different countries. For example, it says in Spain his name is Coco.

Kia ora in Stick News today a security camera monitoring service is giving people a chance to win money if they catch shoplifters.

A website where people can pay to watch security camera footage has been launched in the UK.
Viewers will be awarded points for catching shoplifters in the act and the person with the most points each month will be paid one thousand pounds.
A civil rights group called Liberty isn’t keen on the site.
A spokesperson said: "We shouldn't be paying people to watch out for crimes. It should be done by proper professionals."

And that was Stick News for Thursday 7 October.
Kia ora. 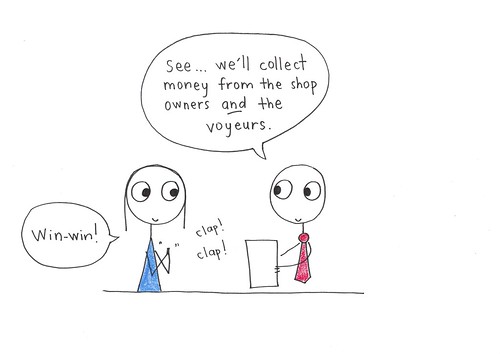 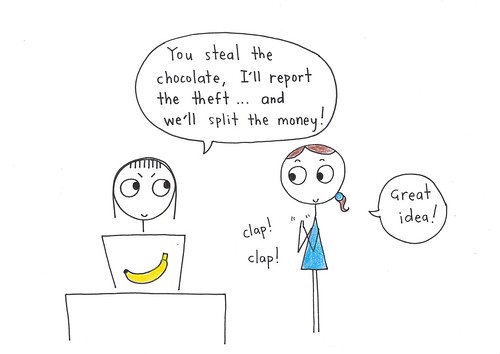 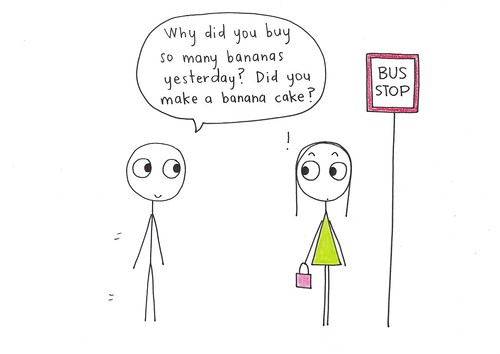 Why did you buy so many bananas yesterday? Did you make a banana cake?
BUS STOP


Word of the Day

The word shoplifting came up in today’s news.

Shoplifting is: the theft of goods from a shop by someone pretending to be a customer.

Lift has many meanings and one of them is an informal word for steal.

Question Time
We filmed today’s question time on a mountain in New Zealand called Ruapehu.
Studio tdes recently visited the mountain to check out a couple of the ski fields. On the second of October, we went to a ski field called Whakapapa and we asked people where they were from and how the conditions were that day and if they had a favourite run on the mountain.
Ah, Auckland, New Zealand.
They’re OK. There’s not a lot of snow. But, it’s not bad. The afternoon seems to be better because it’s a little bit softer than earlier in the morning.
Well, I’m teaching my girlfriend at the moment, so I haven’t gone all the way up to the top.
Auckland.
Ah, the morning was pretty good. It’s a bit soft in the afternoon, but it’s pretty good.
Oh, I don’t know, there’s all … there’s lots of good runs up here. Out west is good, coming down through the Knolls, plenty of challenging bits, yeah.
I’m from Melbourne.
Yeah, it was really good. A bit slushy, but, nah, still really good. But it didn’t really make much difference, because I’m pretty bad anyway.
Um, Auckland.
I think they were quite good early on, but now, in the afternoon it’s, it’s gotten quite slushy I think. But it’s kind of expected from, like, from this time of the season.
I’m from Pukekohe.
Oh, they’re fine. But I’m a, you know, 70-year-old so I suppose I shouldn’t be here.
conversations with sarah
#852 Where is Ruapehu?
Step 1: Repeat Marie’s lines.
Step 2: Read Marie’s lines and talk to Sarah.
Marie Where is Ruapehu?
Sarah It’s in the middle of the North Island.
Marie Near Lake Taupō?
Sarah Yeah. It’s south of Taupō.
Marie Are there many ski fields in New Zealand?
Sarah Yeah, but most of them are in the South Island.
Marie Is Ruapehu the only mountain in the North Island with a ski field?
Sarah No, there’s also Taranaki, but I think that ski field’s quite a bit smaller.
ESL Video Quiz: #1327 Comprehension
Hello everybody, look at yourself, now back to me, now back at yourself, now back to me.
Sadly, you are not a monster.
But if you listen to Grover, you will know all about the word on, just as this monster does.
Look down.
Back up.
Where am I?
Oh, I am a boat.
What is in your hand?
Back at me.
I have it.
It is a clam with two tickets to that thing you love.
On my nose?!
Anything is possible when you smell like a monster and know the word on.
I am on a horse.
Moo.
Cow.
links
today's news
today's news - Sky News
Mt Ruapehu
music
show start
artist: Kevin MacLeod
track: Future Cha Cha
from: Brooklyn, NY, United States
artist site
WOD start
artist: DJ iPep's
album: Home Mix 2007
track: Game Toy
from: EVREUX, France
album at Jamendo
artist at Jamendo
artist site
qt start
artist: Kevin MacLeod
track: Happy Alley
from: Brooklyn, NY, United States
artist site
cws start
artist: Kevin MacLeod
track: The Jazz Woman
from: Brooklyn, NY, United States
artist site
qa start
artist: ioeo
album: triptracks
track: triptrack2
from: Saint Raphael, France
album at Jamendo
artist at Jamendo
qa bgm
artist: Rivers
album: House Juice
track: De funk
from: La Rochelle, France
album at Jamendo
artist at Jamendo
artist site