#1325 You Again, Down To A T, UK Sleepover Show, Rancid, Misogyny
Hi, I’m Sarah. Welcome to The Daily English Show.
Today’s movie is called You Again. It’s an American comedy that came out last month.
In the movie a girl’s brother is engaged to someone who she didn’t get on with at high school.
The girl’s name is Marni and she says: My brother is about to marry the girl who single-handedly ruined my life in high school.
Single-handedly means on your own, with nobody helping you.
The fiancée, whose name is Joanna, seems to be a nice person and Marni’s family is getting along well with her. But Marni thinks it’s all an act, and that Joanna is still a nasty person and she says to her: You’ve got this whole good girl act down to a T.
To a T is an informal idiom which means: exactly or to perfection.
To have something down means to have something mastered.
Down pat, down to a fine art, and down to at T are all similar expressions.
So Marni’s saying that Joanna acts like a good girl very well. She’s mastered her good girl act.
STICK NEWS
Kia ora in Stick News today a theatre company in the UK is putting on a play where the audience is supposed to fall asleep.
The Duckie theatre company is putting on a show in London which involves the audience changing into nightwear and sleeping over.
Tickets cost 42 pounds and the show is on for a month from the end of next June.
The producer is quoted as saying: "Every time I go to the theatre I fall asleep, so I thought why don't we embrace that idea and make a show that deliberately sends people to sleep?"
And that was Stick News for Tuesday the 5th of October.
Kia ora. 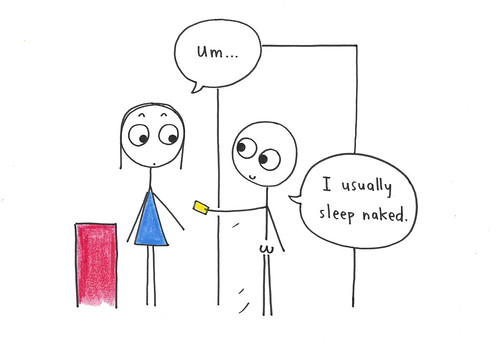 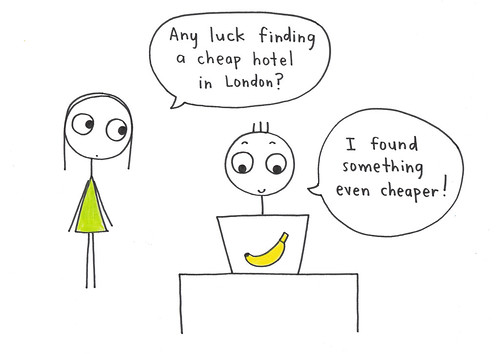 Any luck finding a cheap hotel in London?
I found something even cheaper! 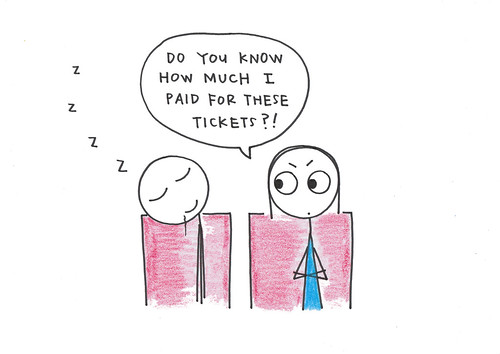 DO YOU KNOW HOW MUCH I PAID FOR THESE TICKETS?!
ZZZZ
Drawings on Flickr.
Word of the Day
Today’s word is rancid.
I read the Wikipedia page for today’s movie.
And there’s a section called: Critical reception, and it seems like some critics didn’t like this movie very much.
One critic wrote: There is not a laugh to be found in this rancid, misogynistic revenge comedy.
Misogynistic means of or characterized by a hatred of women.
And rancid is a word that’s usually used to describe food.
rancid adj. (of foods containing fat or oil) smelling or tasting unpleasant as a result of being stale.
conversations with sarah
#850 Isn’t it funny?
Step 1: Repeat Marni’s lines.
Step 2: Read Marni’s lines and talk to Gail.
Gail So Marni, we have a lot to do before your brother’s wedding.
Marni I just feel bad that I haven’t met his fiancé.
Gail Isn’t it funny? You guys all went to high school together.
Marni Wait, we all went to high school together?
ESL Video Quiz: #1325 Rancid etc
links
today's news
Lullaby - official site
music
show start
artist: Kevin MacLeod
track: Future Cha Cha
from: Brooklyn, NY, United States
artist site
WOD start
artist: DJ iPep's
album: Home Mix 2007
track: Game Toy
from: EVREUX, France
album at Jamendo
artist at Jamendo
artist site
cws start
artist: Kevin MacLeod
track: The Jazz Woman
from: Brooklyn, NY, United States
artist site
qa start
artist: ioeo
album: triptracks
track: triptrack2
from: Saint Raphael, France
album at Jamendo
artist at Jamendo
qa bgm
artist: Rivers
album: House Juice
track: De funk
from: La Rochelle, France
album at Jamendo
artist at Jamendo
artist site